Intel's Euclid computer for robots operates on a battery, has an HDMI port, 3D RealSense camera, Atom processor, and a range wireless sensors 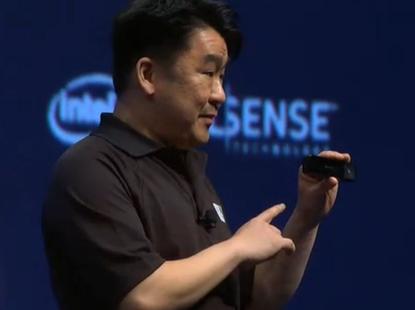 Intel is getting proficient at developing small computers. First, came its Compute Sticks and then its credit-card-shaped Compute Cards.

But nothing's quite like the mysterious Euclid, which is a self-contained computer the size of a thumb designed to be the brains and eyes of a robot.

More details have emerged about the computer, which was announced in August and has yet to be released.

The Euclid is so small and light that's possible to hold like a pen. It has a built-in 3D RealSense camera, making it like a PC fused into a Microsoft Kinect.

The design makes it possible to install the Euclid where the eyes of a human-like robot would be typically placed. The 3D RealSense camera will act as the eyes of a robot, capturing images in real-time and helping with movement.

Euclid has motion and position sensors that can help the robot move around both indoors and outdoors.

Intel announced and demonstrated the Euclid computer in a robot moving on stage during CEO Brian Krzanich's keynote at the Intel Developer Forum in August. The Euclid Developer Kit launch page is up on the website of Mouser Electronics. Intel didn't provide a specific launch date or pricing.

Once the Euclid is placed in a robot, it can be operated remotely through a mobile device or PC. The Euclid has Wi-Fi and Bluetooth connectivity to communicate with the PC.

The Euclid can also "serve as a full, autonomous brain with sensing capabilities, or as a smart sensor controlled by a more powerful computer," Mouser states on its website. The computer has GPS capabilities for navigation.

The Euclid presentation about RealSense technologies last year at the Roscon robotics conference.

The Atom CPU provides the horsepower to process and analyze the images collected by the 3D camera. The CPU will drive a robot's movement and help it complete tasks.

The ZR300 is a 1080p camera bundled with an infrared camera and an infrared laser projector. The combined features will help robots get a better sense of depth and motion, which will aid in movement.

The device operates on a battery and has environmental sensors on the back. One sensor is a barometric pressure sensor. Additionally, it has a microphone and speakers, and HDMI and USB 3.0 slots.