If you believe Amazon Echo is too nosy, you can create a 'kill switch- to shut it off 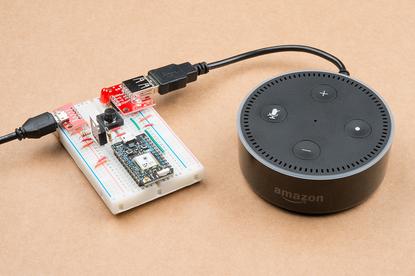 Amazon's Echo is hearing you all the time, and that isn't necessarily a good thing. The device can randomly order items you don't want, record conversations, and has raised several privacy concerns.

But there is a way to shut off Echo through voice commands. A hardware hacker, Shawn Hymel, has created an innovative "kill switch" that can take voice commands to shut off the device. The kill switch is a circuit board attached to Echo via a USB port.

A user can shout a custom command like "Alexa, trigger Echo shutdown" and the kill switch will turn off the Echo by shutting down its power supply. The Echo can be switched back on through a voice command to the kill switch, or by pressing a button on the homemade device.

The Echo kill switch isn't available off the shelf; it's a homebrew project that requires simple hardware assembly and writing some code. The project is rated as "easy," but you'll feel more comfortable if you've soldered on circuit boards before.

Full instructions to make the Amazon Echo kill switch are provided on Hackster.io. Hymel, an engineer at SparkFun Electronics, also provides the code needed for the project.

The kill switch assembly will cost you around US $100. You'll need to buy the popular $69 Particle Photon mini-board, wires, and an additional breadboard with a USB port, with the extra supplies adding up to about $25.

Activating the kill switch will also involve creating a trigger phrase on the IFTTT service to shut down Echo Dot. An applet created on IFTTT connects the Particle board and Amazon's Alexa virtual assistant, which can recognize the shutdown command. Once you ask Alexa to shut down the Echo, IFTTT does the rest.

Amazon's Alexa was popular at the recent CES trade show and its functionality is making its way to cars, refrigerators, smart devices, and other electronics.

Overall, the kill switch is a somewhat expensive but fun project, and it serves a real purpose. It's also a cool way to start making electronics at home.