A former British intelligence agent made the claims in paid research 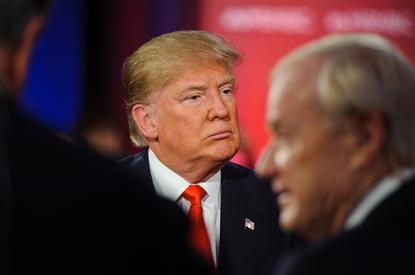 A classified intelligence report on the Kremlin’s suspected efforts to meddle with the U.S. election reportedly includes a bombshell allegation: that Russian operatives have compromising personal and financial information about President-elect Donald Trump.

According to CNN, the allegation was presented to Trump last week in a meeting with U.S. intelligence chiefs to discuss claims of Russia’s role in sponsoring hacks that influenced last year’s election.

Trump had questioned Russia's role in the hacking of the Democratic National Committee before the meeting, but afterwards changed his tune and conceded Russia could have played a role.

The allegation that Russian operatives have sensitive information on Trump is based on memos from a former British intelligence operative, CNN reported on Tuesday.

“The FBI is investigating the credibility and accuracy of these allegations, which are based primarily on information from Russian sources, but has not confirmed many essential details in the memos about Mr. Trump,” CNN said.

Trump and his camp have yet to respond to CNN’s report.

The report said the Trump allegations were included in a two-page synopsis attached to a classified U.S. intel report presented to Trump at the intelligence meeting. The synopsis reportedly claims that “Trump surrogates and intermediaries for the Russian government” allegedly exchanged information during the campaign.

The former British intelligence operative behind the findings previously worked for MI6 and was posted to Russia during the 1990s, according to CNN. He now runs a private intelligence gathering firm.

An hour after CNN ran its report, Buzzfeed published the operative's 35-page dossier on Trump in its entirety. It makes a series of explosive claims about Russia's attempts to influence the election including through hacking and contact between Russia and the Trump team.

The claims have not been verified and perhaps that's why they have not surfaced until now. The allegations have been circulating for months in Washington D.C. and were known among journalists and politicians, according to The New York Times.

On Tuesday, U.S. intelligence leaders met in a senate intelligence committee hearing over the Russian election-related hacks. FBI director James Comey declined to say whether his agency was investigating Trump over possible connections with Russia.

There’s been no sign that Russia ever hacked Trump’s presidential campaign, he said. However, Russia did hack into state-level Republican organizations and local voter registration databases during the election, Comey added.