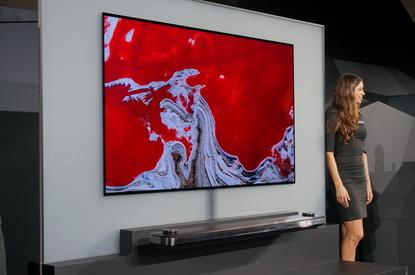 LG kicked off the second press day of the Consumer Electronics Show on Wednesday with a 45-minute keynote featuring robots, consumer appliances, and more products. Here are the biggest announcements that the company made:

AI Comes to the home

One of the first announcements LG made Wednesday was that all of its appliances going forward will be Wi-Fi enabled. The aim is to connect them to the company’s DeepThinq artificial intelligence features.

The connection means that the appliances will be able to improve their performance for individual users over time based on the data gathered through their use.

For example, the company’s robotic vacuum cleaner will learn what obstacles look like and how to avoid them, and its washing machines will automatically adjust their wash cycles to match water conditions.

Robots for the home and business

The company also launched a new Hub Robot, which is meant to serve as a smart home hub and virtual assistant. It sports a body that can bob around as it responds to users' questions, along with a screen that can display facial expressions or even video. One of its key benefits over other hubs like the Amazon Echo or Google Home is that it's able to link into LG's new smart appliances.

Users can ask the LG Hub to do things like delay the start of a load of laundry. The robots will also use the company's SmartLinq AI technology to automate home tasks like scheduling a robot vacuum cleaner to run when people leave home.

It can also perform more standard tasks, like picking out music for users to listen to. The Hub Robot features a camera that can recognize users and give each of them different greetings.

The company is also taking the robot vacuum cleaner concept to the backyard with a new robotic lawnmower, which is supposed to work much like the autonomous indoor cleaners that have become increasingly popular. LG is far from the first player in that market — John Deere, Husqvarna, Worx, and Robomow all offer competing products.

For the business setting, the company unveiled the Airport Guide Robot, which — as the name implies — is built to show users around an airport. It’s built to do things like let users insert their boarding passes and get directions to their gate from a friendly looking robot.

LG also launched an Airport Cleaning Robot which, well, does exactly what its name implies.

What's interesting is that LG has also been working with Amazon to integrate the online retailer's Alexa assistant into its new Smart InstaView Door-in-Door refrigerator, so that users can do things like get answers to questions and order groceries from Amazon. However, these robots don't use Alexa to underpin their intelligence.

On top of all that, the company is also working on security and senior care robots, which would put it in competition with a variety of other players in the space.

In LG's continuing quest to compete with TV makers for consumer dollars, the company launched a new line of ultra-thin televisions built to blend into a customer's wall.

The new LG Signature OLED TV W-series sports a super thin display panel that's designed to sit only a few millimeters away from the wall it's mounted on, while still showing a high-quality picture. All of this is made possible because of OLED technology, which doesn't require backlighting to work.

The 65-inch W7 TV is just 2.57 millimeters deep and is built to be attached directly to a wall using magnetic brackets. The company will also offer a 77-inch W7 TV. The display panel is then connected using a proprietary cable to a large sound bar that also serves as a hub for connecting devices like cable boxes and media players to the TV.

LG hasn’t disclosed pricing for the new TVs yet, but they're likely going to cost a pretty penny.