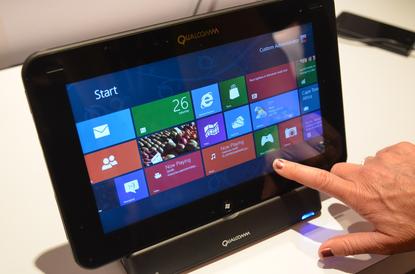 Take your pick: whether you choose an Android smartphone, Windows 10 laptop or hybrid PC device, you'll be able to run Qualcomm's Snapdragon 835.

That sums up the versatility of the new chip: designed primarily for Android smartphones, it has the horsepower to run a PC. In fact, the Snapdragon 835 will  bring never-before-seen features to Windows PCs.

The chip, based on ARM architecture, will first arrive in smartphones later this quarter, with a good chance of appearing in new handsets from Samsung, HTC and LG.

It will also appear in PCs running Windows 10 later this year. Microsoft and Qualcomm in December announced they were collaborating to bring the Snapdragon 835 to "cellular PCs," which are thin-and-light Windows 10 laptops with smartphone-like, always-on connectivity to the internet.

In addition, the Snapdragon 835 has a fast eight-core CPU with four cores to run high-performance applications and four power-efficient cores for mundane tasks like audio playback. It has an integrated GPU that supports 4K video, DirectX 12 gaming and virtual reality headsets. The chip will be able to do a lot of what Intel's mobile chips can do.

The Snapdragon 835 is the first smartphone chip that has the ability to legitimately challenge Intel's decades-long domination in PCs.

In interviews, Dell, Lenovo and HP executives said the idea of cellular PCs with the Snapdragon 835 is interesting, especially with the line between PCs and mobile devices blurring. More PCs need to be constantly connected to the internet for web browsing, e-mail, applications and cloud services.

The capabilities of the Snapdragon 835, along with Microsoft and Qualcomm's promotional efforts, virtually ensures that some PCs will end up running the chip. However, PC makers are taking a cautious approach. They are still evaluating the Snapdragon 835 and haven't yet committed to releasing hardware based on it. That caution could be tied to the rough history of ARM-based Windows PCs.

In 2012, PC makers like Dell and Asus took a chance and built devices with Windows RT, a version of Windows 8 for ARM-based tablets and PCs. Microsoft also built a Surface tablet with a Qualcomm chip. But Windows RT was a bust, partly because of issues related to incompatibility of x86 applications and drivers. Users turned back to Windows PCs running on x86 chips from Intel and AMD.

But times have changed, and Qualcomm has observed and learned. The Snapdragon 835 will run a full version of Windows on ARM, and x86 applications will work, said Cisco Cheng, an evangelist for Qualcomm's Snapdragon technologies.

Microsoft has put up a Youtube video showing Windows 10 running on a PC with the Snapdragon 835. The PC runs a 64-bit version of the OS, supports touch and Windows Ink features, and also can run Win32 applications via hardware-level emulation.

But there is also a new set of opportunities for PCs with the Snapdragon 835, Cheng said. PCs will be thinner, batteries will be bigger, and groundbreaking wireless connectivity features will come to all devices using the chip, Cheng said.

The Snapdragon 835 -- which is based on the Kryo 280 architecture -- is smaller than a U.S. penny and will take up very little space on a laptop or 2-in-1. That helps slim down and reduce the device's weight, and saves space for a bigger battery.

The Snapdragon 835 also has the fastest LTE modem, able to download data at up to 1Gbps. That's even faster than modems in the Apple iPhone 7 and Samsung Galaxy S7, which can download data at 600Mbps.

PCs with the Snapdragon 835 will also get Bluetooth 5, which can transfer data at 2Mbps, two times faster than Bluetooth 4.2. Bluetooth 5 also has a longer range than its predecessor.

In addition, Snapdragon 835 laptops will support 802.11ad, an emerging Wi-Fi standard that can theoretically transfer data at speeds of up to 7Gbps. Qualcomm's promoting a realistic speed of about 4.6Gbps.

The chip also has a feature called Quick Charge 4, which provides five hours of talk time on a smartphone after just a five-minute recharge. That feature could make it to PCs.

Qualcomm did not provide information on CPU performance improvements in the 835 compared to its predecessor, the Snapdragon 820. But the 835's Adreno 540 GPU is about 25 percent faster compared to the GPU in the older chip.

PC makers have been designing laptops and desktops around Intel chips for decades, creating a challenge for Qualcomm. PCs need to be designed and tweaked around a processor, which can be a 12- to 18-month process. So it could take some time for PC makers to design Snapdragon-based laptops and 2-in-1s.

Exactly how PCs will take advantage of the Snapdragon 835 will become clear later this year. But the chip provides opportunities to bring different OSes to PCs. For example, Snapdragon provides a chance to bring Google's Android-based mobile DayDream VR platform to PCs.