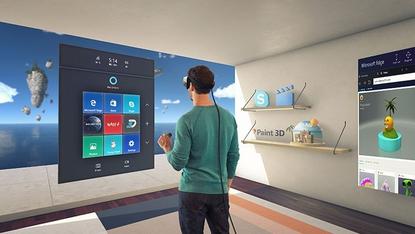 The company has established an amazingly modest set of minimum hardware requirements for upcoming VR headsets to be used with PCs.

Microsoft believes mixed reality is the future of computing and wants to bring VR as many PCs as possible.

The requirements for Windows 10 PCs for tethered VR headsets do not apply to fully integrated headset computers like Microsoft's HoloLens.

Companies like Dell, HP, Acer, Asus, and Lenovo plan to come out with headset accessories for PCs, and Microsoft has said prices for those VR headsets would start at US$299.

Microsoft's requirements are much lower than those for the high-end HTC Vive and Oculus Rift headsets, which require top-class GPUs and CPUs.

The specifications are just a starting point, but the more loaded a computer, the better the VR experience will get, Mingfei Yan, senior program manager at Microsoft, said during a presentation at last week's WinHEC show in Shenzhen, China.

To support a VR headset right now, a laptop will need to have the equivalent of Intel's Core i5 7200U CPU based on Kaby Lake, Intel's HD 620 integrated graphics, and 8GB of dual-channel memory.

The hardware requirements get a bit more demanding next year, when Microsoft releases its Creators Update for Windows 10, which is built around 3D gaming, virtual reality, and 4K movies.

There's a bit more flexibility in the CPU requirements, but a computer may need a discrete or powerful integrated GPU.

For Creators Update, the minimum laptop requirement will be an Intel Core i5 chip -- Microsoft provided the example of a Skylake-based Core i5 6200U.

PCs will also require a minimum of 8GB of dual-channel RAM and more than 10GB of storage. Additionally, PCs should have HDMI 1.4 for 60Hz head-mounted displays and HDMI 2.0 or DisplayPort for 90Hz VR headset displays. Alternately, a PC could have or USB 3.0 Type-A or USB 3.1 Type-C port with DisplayPort Alternate mode.

Other specs include Bluetooth 4.0 wireless connection for accessories like controllers. Faster storage like SSDs and DDR4 memory will provide a better VR experience.

AMD's mobile chips are still being tested for the specification, Yan said.

Microsoft is using tracking technology to establish a "safety zone" to allow people to move when roaming VR worlds or playing games. Microsoft will prompt users to set up an active space in which to move, with the goal for VR users to avoiding crashing into furniture or other objects.

Ultimately, Microsoft hopes VR headsets will be able to communicate with PCs wirelessly. That will provide users with more freedom to roam around larger areas, Yan said.

The company also believes audio will play an important role when interacting with 3D worlds via a VR headset.

For example, Cortana could be an important feature for VR apps in Windows 10. For the VR headset, Yan recommended putting in dual microphones, a headphone jack, or an audio array so users can enable the Cortana experience.

By the next Creators Update, Microsoft will support Universal Windows Platform apps on its mixed reality platform. Microsoft's Edge browser will have VR capabilities with support for the WebVR standard.

Microsoft's goal is to provide the largest catalog of apps and content for VR headsets, Yan said. The company will add new a movie and TV catalog with the Creators Update as a one-stop shop for videos that can run on VR headsets.