The company argues that control over LinkedIn's data would be anticompetitive 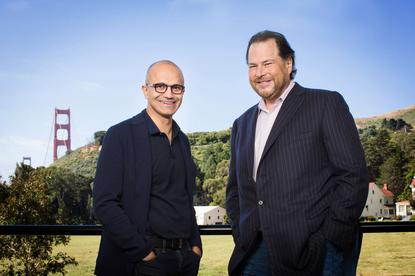 Microsoft made a splash earlier this year when it announced the largest acquisition in its history, signing an agreement to buy LinkedIn for US$26.2 billion.

But now, Salesforce is trying to convince the European Union to block the deal.

Salesforce Chief Legal Officer Burke Norton will argue to the EU's competition authority that Microsoft's control of LinkedIn's dataset following an acquisition would be anticompetitive.

EU competition chief Margarethe Vestager said in January that her agency would be looking directly at whether a company's use of data is bad for competition, and these complaints seem aimed squarely at those comments.

“Microsoft’s proposed acquisition of LinkedIn threatens the future of innovation and competition,” Norton said in a statement on Thursday.

“By gaining ownership of LinkedIn’s unique dataset of over 450 million professionals in more than 200 countries, Microsoft will be able to deny competitors access to that data, and in doing so obtain an unfair competitive advantage.”

The spat is part of what seems to be at least a partial unraveling of the relationship between Microsoft and Salesforce.

Both companies were in a bidding war for LinkedIn earlier this year, but Microsoft won out. Since then, Salesforce CEO Marc Benioff has taken several shots at Microsoft over the deal.

Microsoft President Brad Smith didn't mince words when he fired back at Salesforce, citing the company's dominance in the CRM market.

“The deal has already been cleared to close in the United States, Canada, and Brazil,” he said. “We’re committed to continue working to bring price competition to a CRM market in which Salesforce is the dominant participant charging customers higher prices today.”

Even if the EU doesn't block Microsoft's acquisition of LinkedIn, it could opt to take a deeper look at the deal, which would drag out the process of getting the deal done, likely by a matter of several months. Microsoft and LinkedIn expected it to close this year.

It's yet another in a series of fairly rapid recent hostilities. Despite a partnership with Microsoft, Salesforce recently announced that it would be running more of its workloads in Amazon's cloud.

After that, Microsoft got Hewlett-Packard Enterprise to move from Salesforce to Dynamics 365. It's a far cry from 2014, when the companies forged an historic strategic partnership.