Adobe will use Azure and Amazon Web Services too 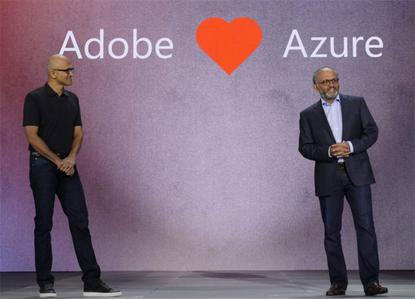 To kick off his company’s Ignite conference in Atlanta this week, Microsoft CEO Satya Nadella announced that Adobe will run three of its most popular software as a service apps on the Microsoft Azure IaaS cloud.

The move is a power play by Microsoft and Adobe on multiple fronts, analysts say.

But, it should also be taken with a grain of salt: A spokesperson for Adobe confirmed that the company has a “large footprint” with AWS and it expects to use both AWS and Azure moving forward. In that sense, it shows the dynamic nature of partnerships across the cloud market.

As part of the agreement, Adobe will make Microsoft Azure its preferred cloud platform for the Adobe Marketing Cloud, Adobe Creative Cloud and Adobe Document Cloud. That means for those three Adobe SaaS applications, the primary infrastructure provider will be Microsoft.

It’s a two-way partnership: Microsoft will also use the Adobe Marketing Cloud as its preferred marketing service for Dynamics 365, marking a partnership between the two companies’ marketing SaaS apps.

To some observers, the move marks a major win for Redmond. Microsoft is in an intense battle for market share with Amazon Web Services in the public IaaS cloud.

In each of the past three years Microsoft and Amazon Web Services have been the only two companies listed as leaders in Gartner’s Magic Quadrant, but AWS has been positioned more favorably than Azure each time.

Earlier this May, AWS had their own big win with a SaaS vendor when Salesforce.com named AWS its preferred infrastructure provider. “Microsoft needed a win on Azure and they got one with Adobe,” tweeted Aragon Research lead analyst Jim Lundy (check out his Tweet for a video clip of Nadella and Adobe CEO Shantanu Narayen announcing the partnership).

Adobe’s partnership with Microsoft is not exclusive, however. According to AWS’s case studies page, Adobe runs its Adobe Systems Managed Services off of AWS.

“We announced Azure as our preferred platform given the go-to-market alignment and benefits as well as enterprise alignment between Marketing Cloud and Dynamics,” an Adobe spokesperson wrote in an email.

“At the same time we will continue to provide choice to customers. We have a large footprint on AWS today and expect to have continued partnership with AWS.”

An AWS spokesperson added: “We have a significant, long-term relationship and agreement with Adobe that hasn’t changed. Their customers will want to use AWS, and they're committed to continuing to make that easy.”

As Adobe double-dips in the IaaS market, it raises an interesting question about companies using both of the leading cloud platforms. “How large does an (enterprise) need to be when they must be multi-cloud?” asked Constellation research’s Holger Mueller on Twitter.

The timing of Microsoft and Adobe announcing their partnerships should be considered as well.

As Alan Lepofsky of Constellation pointed out, Microsoft and Adobe are teaming up the week before one of their biggest mutual competitors, Salesforce.com, is set to kick off its Dreamforce event next week.

While Microsoft and Adobe compete with Salesforce on their suite of SaaS apps, Salesforce and Microsoft have their own partnership too.

Not only are Office 365 contacts integrated into the Salesforce customer relationship management tool, but Salesforce also uses Azure as a development and hosting platform for its ExactTarget email business.

Given Microsoft’s partnerships with Adobe and Salesforce, and its competition in the CRM market with Salesforce, it just goes to show that the cloud sure can make for some strange corporate bedfellows.