The site DCLeaks has been circulating the passport image on Twitter 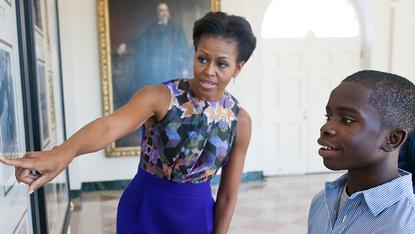 On Thursday, the site DCLeaks began circulating the passport image on Twitter and leaking it to the press. The image includes the U.S. First Lady's alleged passport number.

The site tweeted out the scan after obtaining stolen emails it claims are from a White House aide named Ian Mellul. The files, which are posted on DCLeaks, appear to come from Mellul's Gmail account and date back to February 2015.

Although DCLeaks claims to be the work of "American hacktivists," some security experts suspect that the site is a front for Russian state-sponsored hackers.

Earlier this month, the site leaked emails from former U.S. Secretary of State Powell that criticized presidential candidates Hillary Clinton and Donald Trump. An aide to Powell has confirmed that the emails were authentic.

In posting Michelle Obama's passport, DCLeaks said it's trying to warn the public about the poor security of the U.S. government.

"If terrorists hack emails of White House Office staff and get such sensitive information, we will see the fall of our country," DCLeaks reportedly said.

The passport in question is set to expire in five years, indicating that it's been issued for a U.S. government employee or the spouse of one. However, commentators online have wondered if the image might be fake, and point to inconsistencies in the way the First Lady's headshot has been cropped and her signature.

Even if passport scan is fake, security experts are worried that hackers are influencing news coverage with high-profile leaks, as a way to tamper with this year's presidential election.

The danger is that hackers can end up fabricating information and then passing it off to the press as real, said Bruce Schneier, a longtime security guru, in an interview last week.