Android takes on Apple's tvOS with open-source Poplar developer board 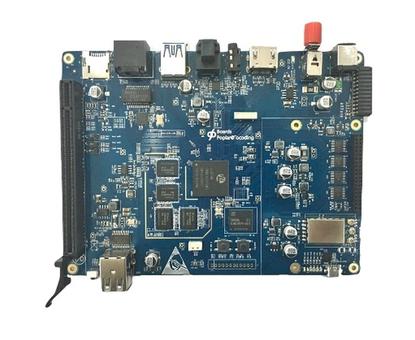 Android isn't as popular in TVs as tvOS, which powers the Apple TV media box. But Linaro, a non-profit organization that champions Android, wants to change that.

A new $79.99 open-source TV board called Poplar, made by Tocoding, brings Android to enthusiasts who want to make set-top boxes at home for broadcast TV and streaming media. It was made based on specifications set by Linaro, which is working hard to make Android a viable TV OS.

Poplar is capable of processing and delivering 4K video. It can work with external tuner cards to deliver video streams from cable or satellite sources, but you'll need to hook up extra hardware for that.

Developer hardware like Raspberry Pi and Pine64 are popular as media servers, and also provide a cheap way to store and dish out movies in home networks through applications like Kodi and Plex. Poplar can be used in home networks, or embedded into home gateways by service providers to deliver video via the internet. The board has a connector for SmartCards, which unlocks cable services.

Android TV is available in set-top boxes like Nvidia's Shield, but these devices aren't as popular as Apple TV or Roku, which runs on a proprietary OS. Google scrapped an earlier version of Android in its Google TV software, which was used in failed products like Logitech's Revue.

Thumb-size computers and set-top boxes with unofficial versions of Android are already being made by small Chinese and Taiwanese companies, and can be used for Netflix and Hulu. But Poplar has the unique ability to work with digital TV tuners.

Poplar will be compatible with versions of Android and Linux that Linaro is developing specifically for TVs. The goal is to develop a common set of media protocols and services that can be used as a standard across set-top boxes. Linaro is getting help from AOSP (Android Open Source Project).

The Poplar board has a 64-bit ARM quad-core processor based on the Cortex A53 design. It has an ARM Mali T720 GPU, which supports 4K HEVC and VP9 video formats. It also has 8GB of storage and 2GB of DDR3 memory, but can support the faster and more power-efficient DDR4 memory. Wireless options include Wi-Fi and Bluetooth. Other features include a gigabit Ethernet slot, a PCI-Express 2.0 interface, a SmartCard slot, and a 24-pin TV tuner connector. It also has a 40-pin interface to attach peripherals and expansion boards.

Poplar's schematics have been published by Tocoding, meaning hardware makers can fashion their own media boards based on the design. It is available for $79.99 on Aliexpress.