US must beef up its cyber muscle, Trump says 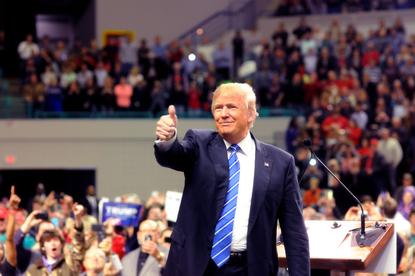 The U.S. Department of Defense must pump up its cyber capabilities, including its offense, as part of a huge planned expansion of the military, Republican presidential candidate Donald Trump said Wednesday.

Trump, repeatedly criticized in the IT community for a lack of a tech policy agenda, called for new investments in cybersecurity during a speech focused on military programs. The businessman didn't put a dollar figure on the new cybersecurity investments but mentioned them as part of a proposed multibillion-dollar expansion of the U.S. military.

Trump will ask military leaders and federal agencies "to conduct a thorough review of United States cyber defenses and identify all vulnerabilities -- in our power grid, our communications systems, and all vital infrastructure," he said during a speech in Philadelphia. "We will invest heavily in offensive cyber capabilities to disrupt our enemies, including terrorists who rely heavily on internet communications."

Under Trump, the U.S. will make it a priority to develop both defensive and offensive cyber capabilities at U.S. Cyber Command, he said. U.S. cyber operations will "recruit the best and brightest Americans," he added.

Trump also used the speech to repeat his criticism of rival Hillary Clinton's decision to use a private email server while she served as secretary of state. "Hillary Clinton has taught us all how vulnerable we are to cyber hacking," Trump said.

A recent FBI report said one email account on the Clinton server was hacked in 2013.

Investments in cybersecurity and in the military will create new jobs and the "technologies of tomorrow," Trump said. "America must be the world’s dominant technological powerhouse of the 21st century, and young Americans -- including in our inner cities -- should get these new jobs."

Trump's military plan includes spending money on more than 70 new ships and more than 70 new fighter aircraft, plus expanding the U.S. fighting force by 50,000 people, or about 10 percent. He didn't talk about how he would pay for that expansion.

While many members of the U.S. tech community have questioned Trump's tech policy plans, Clinton has released a detailed tech policy agenda.