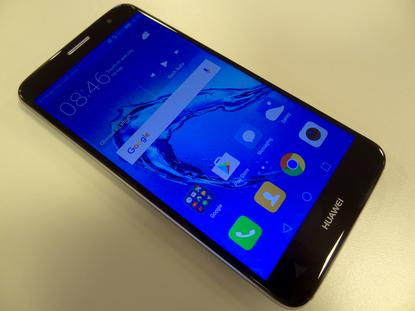 Practical and reliable is the image Huawei Technologies is trying to project with two new smartphones unveiled at the IFA tradeshow on Thursday.

The two phones are aimed squarely at the mid-market, and feature tried and trusted technologies, according to Kevin Ho, president of Huawei's handsets product line. So it's strange that, for phones with so little novelty, Huawei has decided on the name Nova.

The Nova and Nova Plus are solid phones with rigid, confidence-inspiring aluminum cases. They run Android Marshmallow on eight-core Qualcomm processors with 3GB of RAM and 32GB of flash storage, expandable via a microSD slot. There's a fingerprint sensor on the back of the case.

Recharging is via a USB C connector, and the batteries -- 3020 mAH and 3340 mAH respectively -- provide a working time of "up to two days," according to senior product manager Michael Seitz. For heavy users like himself, that's more like a day and a half.

The company has been doing a lot of work on its software to lower power consumption and improve battery life. Version 4.1 of its Emotion UI was initially criticized for being too aggressive in its freezing of apps to save power: Instant message notifications would often be delayed when the apps were in the background. That's been tweaked in a June update to EMUI 4.1, said software business development director Christophe Coutelle: A whitelist ensures that instant messaging and similar apps are allowed to deliver notifications in a timely manner, while others remain frozen to save power.

The way Huawei customizes the Android interface has drawn criticism from some quarters. Gartner Research Director Annette Zimmermann is not a fan, saying she finds it takes extra taps to accomplish some tasks compared to Samsung Electronics' Touchwiz interface. On the other hand Zimmermann sees Huawei's focus on enhancing its cameras with additional software functions as significant given the importance of the camera to phone buyers.

Criticism of the UI is partly a matter of taste, said Ho, and partly a problem to which Huawei is dedicating more resources, especially to satisfy the needs of Western European customers. It's listening to those customers complaints on social media, and taking note of those that recur most often.

Although Huawei loads many of its own apps on the phones, it allows users to delete most of them, reloading them from the app store if they change their minds. Other manufacturers bake their own apps into the OS images, taking up additional storage space whether buyers want them or not.

Buyers in Europe are unlikely to pay that much up front, because in Europe the subsidy market is still quite important, said Forrester analyst Thomas Husson.

Either way, the Novas' specs look good for the money, he said. "Huawei is pretty good at delivering products for an affordable price."

For Husson, the question is how Huawei is going to establish this new sub-brand. "They are going to have to invest quite a bit in marketing."

It's not just new phones the company is unveiling at IFA: There's a new tablet too.

The MediaPad M3 continues the relationship with audio specialist Harman Kardon that Huawei began earlier this year with the launch of the M2.

In addition to Harman Kardon's audio enhancements, the silver case holds an 8.4-inch, 2K screen with a white bezel, 8-megapixel cameras front and back, 4GB of RAM and 32GB of flash storage.

A premium version with a gold-colored case, 64GB of storage and a special headset from AKG will also be available.

The 5100 mAh battery will play music for days, or allow people to watch videos while commuting, Seitz said.

All models have Wi-Fi, and LTE will be available as an option. The price, when the M3 goes on sale in a couple of months, will be between €300 and €400 depending on the version.