Pix enhances photos as they're shot 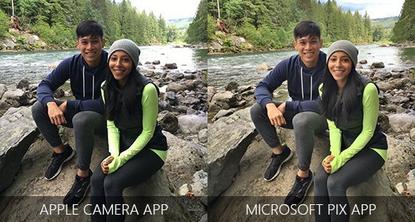 There's a new iPhone camera application on the block that's supposed to be better at taking pictures than the one Apple ships with its phones ... and it's built by Microsoft.

The company's research arm launched Pix, which enhances the photos that users take in a variety of ways, on Wednesday morning. The app is  designed to make photos look better and even improves on Apple's Live Photos ability to capture scenes that have moving elements in them.

It's part of Microsoft's continued push to build applications for platforms beyond those that it controls directly, especially iOS and Android. The free app was built by members of Microsoft Research, and released for free on the iOS App Store.

Pix is particularly well-suited to take pictures of people, and is built to make adjustments to a photo on the fly as the scene changes. That way, the exposure of an image should always be tuned to the right conditions. It recognizes faces and uses Microsoft's Hyperlapse technology to stabilize video shot with the app, too.

When users press the shutter button, the app will take a burst of photos and then pick out the best ones for final use. That burst is also used to power Pix's Live Image feature, which creates a short moving picture when there's motion in a burst.

That's an improvement on Apple's Live Photos feature, which captures video before and after every photo is taken. Microsoft touts its feature as a way to get the best parts of Apple's moving picture functionality without requiring as much storage space and stabilizing the result.