How a digitally driven Microsoft is creating a new-look channel 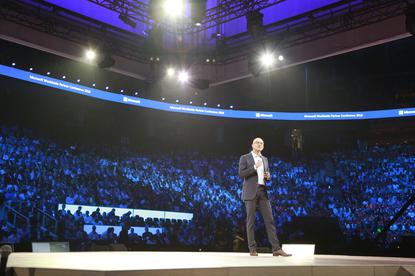 With a sea of flickering lights shining onto the stage, Satya Nadella exposed the world to Microsoft’s way of thinking.

In laying out his vision for the future at 2016 Microsoft Worldwide Partner Conference in Toronto, the forward-thinking CEO spoke of a digitally driven world, outlining how Redmond is building the brain of the future, underpinned by an intelligent cloud and a changing partner network.

But sometimes, it’s not what you say, it’s what you don’t say that counts.

In dedicating a 90 minute opening keynote to the notion of digital transformation, drilling down into its impact on businesses and industries, Nadella addressed a new breed of partner.

For the last time Microsoft and its changing channel descended on Toronto, the partner makeup was different.

Of the 16,000 partners in attendance - a record-breaking haul - 40 per cent are first time attendees, demonstrating a sizeable shift in the Microsoft partner ecosystem.

Triggering such a shift is the tech giant’s focus around reinventing business processes, utilising the huge graphs of information now available.

“Businesses of all sizes in every country will not just use digital technologies, but become digital companies themselves,” Nadella said.

“Each company is attempting to digitally transform to achieve the same four outcomes - to engage customers, empower employees, optimise operations and transform products.”

Whether it be data and analytics, mixed reality, cognitive services or new powerful algorithms, the air of intelligence permeating through the Canadian city showcased the smart bets at play.

With a week of announcements still to come, the biggest story coming out of Worldwide Partner Conference will no doubt be the changing face of the channel, as Microsoft’s digital agenda drives traditional resellers away, and new partners to the table.

Fresh from Cortana recapping the momentum of the past twelve months, Nadella took to the stage to emphasise the digital outcomes that CIOs consider top priorities.

After showcasing C-level testimonials from Adobe, PayPal, General Electric and Best Buy among others, Nadella explained that digital change isn’t just restricted to the larger end of town, carving up new opportunities across small and medium-sized organisations.

With a digital mandate clear, Nadella warned partners that such change won’t happen with “another bolted-on cloud app” or “a giant implementation of monolithic and closed business application packages”, demonstrating a shift towards a more creative way of thinking.

“Digital transformation requires systems of intelligence that are tailored to each industry, each company, each micro-task performed by each person,” he explained.

“Systems that can learn, expand and evolve with agility as the world and business changes.”

Central to Microsoft’s blueprint for future growth is Dynamics 365, and its ability to provide built-in insight and intelligence within business applications, through apps such as field service, sales, finance and operations.

Fresh from its release last week, Microsoft is bundling its CRM and ERP solutions into one new cloud platform, providing the vendor with new ammunition to gun down industry rival Salesforce.

Key to the success of Dynamics 365 will be its ability to unlock data stored in silos, and through its integration with Office 365, provide purpose-built Software-as-a-Service applications with intelligence built it.

“Each system of intelligence needs to be centred around a person and encompass anything that the person needs to do in the context of their role,” Nadella explained.

“This means removing the impedances that exist between the business solutions people work across today; breaking down barriers between productivity, collaboration and business processes; and creating a new customer-centric business model aligned to the realities of these roles today.”

Nadella said the systems of intelligence require a platform where any business or ISV can add unique value to a company’s digital transformation by extending and integrating its existing systems and business processes.

“The world is digitising and when you look ahead there is an increasing drive for better productivity and efficiency, creating a new for digital services and products,” he added.

“Developers and ISVs, imagine a world where you can build systems of intelligence to transform business for every company of every size in every industry.

"Partners, imagine a world where your SaaS apps can be easily discovered by millions of customers and other partners.”

In looking ahead, Nadella predicted ongoing change in how businesses approach digital transformation, and how it will be played out in the Cloud.

Revealed at the Build developer conference earlier this year, Microsoft played out the bot use case on stage, demonstrating the value of Conversation-as-a-Platform (CaaP) and how humans and computers can form complementary ways of working, in a Man with Machine type scenario.

“We still have to navigate operating systems, use individual applications and learn about menu structures but what if we could teach computers to understand human language.

“Everyone today who's building applications, whether they be desktop apps, mobile apps or websites, will build bots as the new interface.”

Exposing the industry further to its future way of better enabling productivity, Microsoft also made its biggest pitch yet for HoloLens to be used as a business computing device, evident through the vendor’s on stage demonstration focused around jet engine training.

In showcasing a workplace similar to a huge multi-monitor desktop setup, through the tap of a finger a jet engine model emerged, detailing the intrinsic nature of the model and how to navigate around its complex structure.

Yet this was no traditional desktop, rather played out in front of an empty table on stage, visualised through an augmented reality headset that threatens to reshape the way businesses maximise the notion of mixed reality.

With digital transformation at its core, Microsoft is becoming smarter as it builds the brain of the future.

But as the ecosystem transforms in tandem, partners are faced with two options; lead or leave.

James Henderson is attending 2016 Microsoft Worldwide Partner Conference in Toronto as a guest of Microsoft.