The company will work with Google on Chromebooks, IoT development 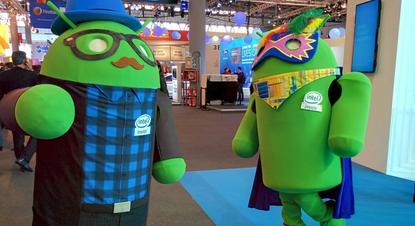 Android was once a big part of Intel's plans in mobile devices, but the company is now paying much less attention to the OS.

Intel is moving away from developing Android for x86 processors used in smartphones, since it is exiting the handset market. The company's commitment to Android development for tablets, however, is also under question.

The company still has a strong partnership with Google, with an Intel spokeswoman saying in email, "We continue to work with Google on supporting their OS for different product lines including Chromebooks, tablets and IOT products."

But Intel declined to comment specifically on its level of commitment to Android for tablets, a market in which device shipments are declining. Meanwhile, Intel's Android upgrades for tablet hardware are far and few between, suggesting the company is not focusing on it as much as it once did.(Smartphone and tablet OS updates are usually delivered by device makers or carriers.)

Dell, for one, won't deliver OS upgrades to its now discontinued Android-based Venue tablets, which ran on Intel Atom chips. And like Dell, Intel is shifting its focus from tablets to 2-in-1s, which run mostly on Windows.

Meanwhile, it isn't clear if Intel will continue to offer Android as an option along with its Celeron, Pentium and Core processors. Intel's x86 version of Android was mainly for devices with Atom processors, which the chip maker is phasing out from tablets and PCs in favor of new chips, code-named Apollo Lake. Most Apollo Lake systems will run Windows, according to Intel executives. It's not sure if they'll support Android.Otherwise, Atom chips are now central to Intel's burgeoning internet of things business.

An edition of Android 5.1.1, code-named Lollipop, for the MinnowMax developer board was the last version of the OS made publicly available last year by Intel. Intel-based mobile devices mostly run Android 5.0 or older versions. There are some signs that Android will continue to live on Intel chips, however. Asus, for example, has said it would bring Android 6.0, code-named Marshmallow, to its Intel-based Zenfone 2 handsets in the second quarter. And for now, it looks like Android 7.0, code-named Nougat, will be compatible with x86 chips.

In addition, the independent Android-x86 Project last month delivered the Android-x86 6.0 Release Candidate 1. Intel could offload development to that project, and provide the backend support.

Intel put its full weight behind Android in 2011 after striking out on multiple OSes. In 2007, Intel started working on Linux-based Moblin, which was merged with Nokia's Maemo into a new OS called Meego in 2010. Meego was merged with LiMo into Tizen, which is now in Samsung TVs and smartphones.

Even as Intel's Android efforts wane, though, its partnership with Google will remain strong, and will focus on the chip-maker's new target markets. Intel in April said it was laying off 12,000 people as it chased the growth areas of IoT, servers, connectivity, 2-in-1s, silicon photonics and FPGAs (field programmable gate arrays).

Intel is a lead partner in Google's Brillo, an embedded IoT OS with the underpinnings of Android. Brillo works on Intel's Edison development board, which can be used to make wearables, robots, smart home devices and other IoT gadgets.

And shipments of Chromebooks -- most of which have Intel chips, and are based on the Chrome OS -- are growing in an otherwise slumping PC market.

But the company is missing out on some of Google's most exciting projects like DayDream, a VR platform for Android devices.