It's all about making fulfillment faster 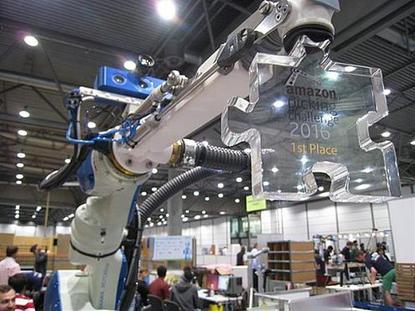 Amazon is always on the lookout for new robotic technologies to improve efficiency in its warehouses, and this year deep learning appears to be leading the way.

That's according to the results of the second annual Amazon Picking Challenge, which has been won by a joint team from the TU Delft Robotics Institute of the Netherlands and the company Delft Robotics.

Amazon's 2016 event was held in conjunction with Robocup 2016 in Leipzig, Germany. Two parallel competitions took place: a Pick Task much like last year's, in which a mix of items has to be lifted from warehouse shelves and packed into a container; and a new "Stow Task," which involves taking items out of a tote and putting them onto the shelves.

The Pick Task asked contestants to pick up and safely deposit 12 items from a mixed shelf into a container in the shortest possible time. Sixteen teams from around the world took part as finalists, but the Delft team's entry won the day with its robot arm, 3D cameras, gripper and deep-learning artificial intelligence. The system's components were developed with the Robot Operating System for industry (ROS-Industrial), and will be released as open software.

The Stow Task called for competitors to move 12 mixed items from a container into bins on the shelves, and the Delft team won that one as well, for a combined prize reportedly amounting to US$50,000.

The robots will be demonstrated at TU Delft's Science Centre this Thursday.