Intel, SAP, other tech companies pledge to get more inclusive in hiring

The over 30 companies have signed a 'Tech Inclusion Pledge' 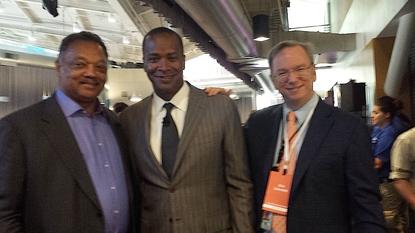 Intel, SAP, Lyft, Spotify and VMware are among over 30 Silicon Valley companies that on Wednesday signed a pledge that they would take action to make their technology workforce "fully representative of the American people, as soon as possible."

The absence of diversity in the tech industry in Silicon Valley was highlighted about two years ago by civil rights leader Rev. Jesse Jackson, who pressed some companies to release data on their employment of Blacks, Hispanics and women. Many tech companies like Google and Intel released data but it was found that their workforce was predominantly male and white.

Under pressure from Jackson to set specific goals, some companies announced their plans for promoting inclusion. Intel, for example, made a pledge to invest US$300 million on diversity and inclusion and announced a goal to reach full representation of women and underrepresented minorities in its U.S. workforce by 2020. Google also announced a $150 million expenditure to get more women and other minorities into the tech industry.

In their letter Wednesday to U.S. President Barack Obama, ahead of a global entrepreneurship summit in Silicon Valley, the companies have committed to implement and publish company-specific goals in the areas of hiring, retaining and advancing diverse technology talent. The companies have also committed to annually publish data and progress metrics on the diversity of their technology employees across functional areas and seniority levels, and to partner to build a diverse pipeline of technology talent.

Diversity makes good business sense too, according to a report jointly published by Intel and Dalberg Global Development Advisors. Studying diversity data from nearly 170 companies, the study has found a correlation between more diverse tech work forces and higher revenue, profits, and market value. The report estimates that an additional US$470 to $570 billion in new value for the U.S. technology industry could be created through full representation of ethic and gender diversity.

Companies that are more diverse are more likely to be innovative and have a higher number of patent applications, according to the study. They are also more likely to be be able to retain talent. As importantly, diverse companies are better able to identify products and services that minorities would like to buy.

The challenge for tech companies could be their ability to hire and retain minorities in their workforce. Tech companies like Google find it difficult to recruit and retain women and minorities, wrote Laszlo Bock, Google’s senior vice president for People Operations, in a blog post in 2014, after the company released inclusion data.

Tech companies are hence trying to get involved in boosting the number of people from minority communities that get trained in skills that are relevant for the tech industry. Part of Intel’s investment, for example, will support scholarships for Hispanic college students who have chosen a science, technology, engineering, or math major, in partnership with the Hispanic Foundation of Silicon Valley. Google is also focused on making computer science education accessible and available to all, besides focusing on areas such as bridging the digital divide.