5 reasons the Surface Pro 4 is fit for the enterprise

The Microsoft Surface Pro 4 is the clear choice of hybrid for the enterprise -- and for good reason. Here are five features that make this device the best option for business users. 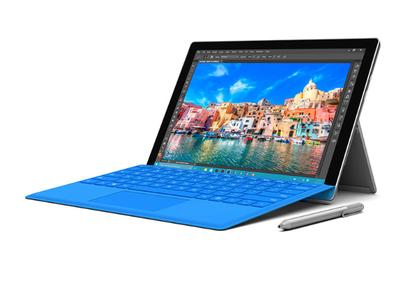 Many manufacturers have been vying for the title, " best enterprise hybrid tablet" since the release of the Apple iPad Pro and Samsung TabPro S.

However, none have managed to live up to the Surface Pro 4, which was quickly hailed as one of the fastest adopted enterprise tablets soon after its release, and it recently surpassed the Apple iPad Pro for sales in the U.K.

It's popularity is no accident Microsoft has spent years tirelessly improving its hybrid offerings, and that work has resulted in an ideal hybrid enterprise device. Microsoft's Surface Pro 4 has a lot going for it in the corporate world, and it and become a great option for any IT department looking to transition to a hybrid tablet device. If you're thinking of getting a Surface Pro 4 for business, here are the top five features of the Surface Pro 4.

If you constantly find yourself on the road for business, whether you're travelling by car, plane or train, you want something that isn't going to weigh you down or take up a lot of space in a carry-on. Traditionally speaking, business laptops aren't slim or compact, but that's not the case with the Surface Pro 4. It throws the stereotype of "cumbersome work laptop" out the window with a compact design that won't add much extra weight to your luggage. It's compact enough to fit onto the seat back tray of an airplane, but not so small that you'll compromise on the user experience. You can easily be productive with this device, but at the same time, it offers all the entertainment features you'll want in your downtime - no need to carry a second device for that.

The portability and flexibility of the Surface Pro 4 allows you to work in notebook mode or tablet mode by simply attaching or detaching the Microsoft Type Cover. The device itself is supported by a kickstand with a wide range of motion, while the keyboard magnetically attaches to the base of the device, but doesn't act as a supportive base for the display. The keyboard is sold separately, so you'll need to factor that into the cost of the device - but you can typically find it for around $105, now that the device has been out for a while. The keyboard and trackpad are spacious and responsive, and allow for a more natural transition for anyone coming from a typical business laptop. You won't have to compromise on productivity with the Type Cover as you might with some smaller, more cramped tablet keyboards you can find on the market.

If you spend all day entrenched in Excel and PowerPoint, you've probably come to embrace the beauty of dual screens. But that requires ports - and if you were also hoping to use a thumb drive, external keyboard or mouse, that means you will need a lot of ports. And the competition doesn't match up to the Surface Pro 4 in this area. There's a Mini DisplayPort, a USB 3.0 port and a separate charging port on the device itself. That means, unlike the Apple iPad Pro or Galaxy TabPro S, you won't have to use one port with a converter for all your peripherals - and that is one less accessory for you to forget at home when trying to catch a flight.

If you work at multiple offices and travel often, you might even want to invest in the Surface Dock. It's a small, compact unit with four USB 3.0 ports, audio output, an Ethernet cable port and two high-definition video ports, which give you the capability to connect to two more displays. You'll get expansive ports, so you'll never sacrifice productivity, and you'll have the capability to quickly set up a workstation in any office you visit.

If you plan the Surface Pro 4 as a tablet, you'll want to get to know the Surface Pen. It's thin and lightweight, but you don't have to worry about losing it because it magnetically clings to the side of the device when you aren't using it. You'll find an eraser - one that actually works - on the pen, and you can even purchase a tip kit so you can have different styles to write or draw with. The pen makes it easy to sign legal documents on the go, take notes and even markup and edit documents without having to find a printer.

ITcan take some practice to adjust to, but if you can get the hang of it, the pen will allow for a better experience in tablet mode. It performs similar actions to a mouse, allowing you to drag and drop items, resize windows, open task bars and launch programs with precision. You can get a pen for most devices, but few are as finely tuned to the device as the Surface Pen is to the Surface Pro 4 - you can compare it to the Apple iPad Pro and Pencil. It also ships with the device, so you won't have to make a separate purchase.

[ Related story: Microsoft Surface Pro 4 review: It's faster, it's better, and it has more competition ]

Microsoft knows that every business user needs a different level of computing performance - not everyone can be productive with a lower-powered processor. With the Surface Pro 4, you can configure the device with a myriad of options - whether you want a high-powered Intel Core i7 processor or a mobile processor, you can configure it to your needs. Of course, the better the configuration, the more expensive the device, with prices starting at $899 for the entry-level version featuring an Intel Core m3 processor, 4GB of RAM and 128GB of storage. Alternatively, you can max out the device with an Intel Core i7 processor, 16 GB of RAM and 256GB of storage for $1,799.

Each version of the Surface Pro 4 comes equipped with Windows 10, so if you're already accustomed to the Windows operating system and Office Suite, the Surface Pro 4 will be a natural transition. Unlike other tablets that might run a mobile operating system, you don't have to compromise and use the watered-down app versions of Excel, Word, PowerPoint, OneNote or Outlook. Instead, you can use the same programs you're used to using on your notebook or desktop. You can still download apps, and while the Microsoft Store doesn't have the best reputation for apps, you will find more popular apps like Facebook and Pandora in there.

Microsoft knows the risks involved for businesses that transition to a new type of technology or for businesses that are early adopters of hybrid tablets. Budgets are typically tight, so IT leaders want to be sure they are getting the most for their money. Microsoft was a step ahead of other hybrid manufacturers with enterprise initiatives; shortly after the device was released, the company announced incentives exclusively aimed at businesses.

The Microsoft Complete for Enterprise program is tailored for anyone purchasing a fleet of Surface devices for corporate use. For the average consumer, you get up to two warranty claims for the Surface Pro 4 within the warranty period - but that doesn't make sense for an IT department purchasing a fleet of devices for an entire department. Instead, Microsoft allows businesses to pool all of those claims -- two per device -- and use apply them as needed throughout any device's warranty period. That means someone can break their device four times and IT won't be limited to just two claims. Beyond the warranty incentives, Microsoft also included a number of security features - including the capability to destroy a dead device on site, without the need to return it to Microsoft. You'll still get your new Surface device, without the risk of mailing back a hard drive filled with sensitive corporate data.

Microsoft also partners with resellers, like Dell, so businesses can order devices directly through them and still get the same customer support they would with a Dell device. It's also a great option for businesses that only want to deploy Surface devices to certain business units, and use another manufacturer, such as Dell, for the rest of the company. And once it comes time to upgrade to the latest version of the Surface Pro, Microsoft allows businesses to trade in old Surface devices for a credit towards the new purchase.