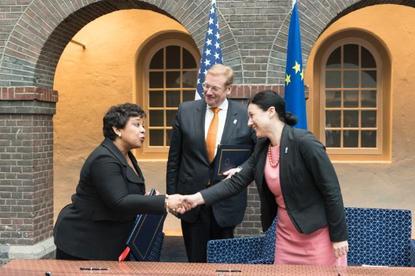 The European Commission has signed a landmark agreement with the U.S. in its quest to legitimize the transatlantic flow of European Union citizens' personal information.

No, it's not the embattled Privacy Shield, which the Commission hopes to conclude later this month, but the rather flimsier-sounding umbrella agreement or, more formally, the U.S.-EU agreement "on the protection of personal information relating to the prevention, investigation, detection, and prosecution of criminal offenses."

It covers the exchange between EU and U.S. law enforcers, during the course of their investigations of personal data including names, addresses and criminal records. U.S. Attorney General Loretta Lynch, European Commissioner for Justice Vĕra Jourová and Dutch Minister for Security and Justice Ard van der Steur signed the agreement in Amsterdam on Thursday.

One benefit of the agreement for EU citizens caught up in such investigations is that they will benefit from the same rights to judicial redress as US citizens if a privacy breach occurs, thanks to the recently passed Judicial Redress Act.

A stumbling block on the way to the agreement was U.S. senators' delay in approving the act after its approval by the House of Representatives.

The agreement won't become part of international law until the European Parliament, noticeably critical of the Commission's data protection plans in recent weeks, has given its approval.