AI looms large in Google's view of the future

'We will move from a mobile-first to an AI-first world," Google CEO Pichai said 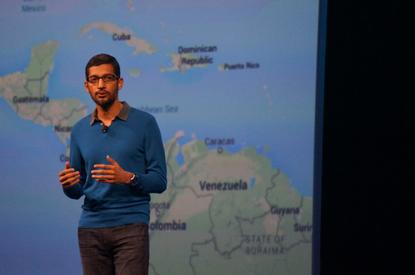 AI technologies such as machine learning will play a key role in shaping the future, Google CEO Sundar Pichai said in the company's annual Founders' Letter to stockholders.

"It’s what has allowed us to build products that get better over time, making them increasingly useful and helpful," wrote Pichai, who cited examples such as voice search, translation tools, image recognition and spam filters.

The recent victory of DeepMind's AlphaGo software over legendary master Lee Sedol at the ancient game of Go is "game-changing," Pichai added. Far from portending humanity's downfall, however, the victory is ultimately one for the human race, he said.

"This is another important step toward creating artificial intelligence that can help us in everything from accomplishing our daily tasks and travels to eventually tackling even bigger challenges like climate change and cancer diagnosis," Pichai said.

That's true in the working world as well as daily life: "Your phone should proactively bring up the right documents, schedule and map your meetings, let people know if you are late, suggest responses to messages, handle your payments and expenses."

Looking ahead, Pichai expects the concept of the “device” to fade away.

"Over time, the computer itself -- whatever its form factor -- will be an intelligent assistant helping you through your day," he said. "We will move from a mobile-first to an AI-first world."

Facebook CEO Mark Zuckerberg has placed big bets on AI recently as well, including announcing chatbots based on the technology.

This year's Founders' Letter was the first by Pichai, who took over Google last October. Larry Page and Sergey Brin, who wrote previous letters, now are CEO and president of Alphabet, the holding company Google formed last year.

The letter didn't discuss Alphabet, which has now been in business for six months. Alphabet reported $3.6 billion in losses last year through investments in "moonshot" projects such as self-driving cars and Internet balloons, but net profit for the last three months of 2015 rose to $4.9 billion.

"I’m really pleased with how Alphabet is going," Page wrote in a note preceding Pichai's letter.