Microsoft fires back at AWS with Azure Functions service and more 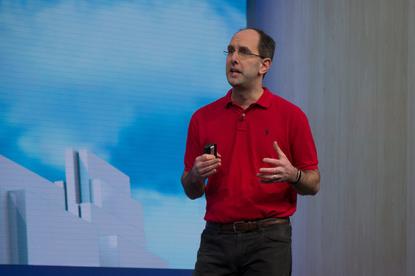 Guthrie showed off a variety of new capabilities for Azure during a keynote address on Thursday, the second day of Microsoft's Build developer conference. The features include a new Azure Functions service, which lets developers set up functions that activate whenever a particular event happens.

Developers don't have to set up the compute capabilities necessary to run the function, either: Azure handles all of that for them.

It's a direct competitor to the Amazon Web Services Lambda service, which provides developers with similar functionality. Both services are interesting because they allow developers to create functions in the cloud and run them without having to worry about managing infrastructure, something we're likely to see even more of as the public cloud market matures.

In addition, Guthrie also announced the general availability of Azure Service Fabric, an Azure service that automatically scales microservices running in the cloud. It's what Microsoft uses internally for a number of its services and applications, too.

Microsoft is also releasing a new Azure IoT Gateway SDK that's aimed at connecting older embedded systems to the cloud without having to replace hardware. That's going to be particularly useful for large companies that are already Microsoft customers, and will help encourage them to consume more cloud services.

Developers who want to dip their toes into the Internet of Things can try some of the new Azure IoT Starter Kits, which are designed to help developers get started building for the Azure IoT Suite with hardware that's purpose-built to connect to the cloud. The kits cost between $50 and $160.

The news is all aimed at pushing Microsoft's cloud platform at a time when it's facing increased competition from Google Cloud Platform and Amazon Web Services.