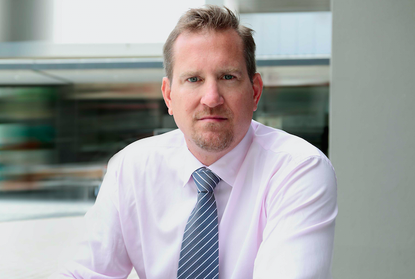 “In being an accredited Azure provider, this gives us a lot of credibility within the market and by also drawing on our security expertise, our suite of solutions are helping businesses move to Office 365.

With regards to Azure, Microsoft is experiencing accelerating adoption across the world, backed up by 140 percent growth globally and revenues in 2015 hitting between $US500 - $US700 million - accounting for approximately two percent of total Microsoft revenue.

Validated by the closing of a substantial $US25 million enterprise Azure deal in 2015 - according to Forbes - industry analysts are united in the belief that during the next twelve months, Redmond will continue to chip away at Amazon’s public cloud dominance.

From a Barracuda perspective, Romans believes such market growth helps carve out a strategic channel play at a local level, built upon the security providers strong Azure standing.

Announced at Microsoft Worldwide Partner Conference 2014 in Washington D.C., Scott Guthrie, Executive Vice President of the Cloud and Enterprise, Microsoft confirmed that the Barracuda Web Application Firewall and the Barracuda NG Firewall were now Microsoft Azure Certified - at the time it was an industry first.

Fast forward two years and Romans says Barracuda continues to build on its long-standing security relationship with Microsoft, offering resellers the chance to utilise next generation fire-walling across both Australia and New Zealand.

“We were the first security solutions provider to be certified and we’re recognised as a top partner within the Azure marketplace,” Romans adds.

“While we’re not the only security solutions provider out there, our differentiator is built around our ability to offer more functionally within Azure.

Specific to resellers, Romans says opportunities are growing for partners assisting customers moving IT infrastructure to the cloud, whether that be through running on Azure or utilising Office 365.

Much like Azure, Office 365 adoption is also on the rise, triggered by an aggressive cloud offensive in 2016.

As reported by Reseller News, Redmond has revealed plans to fast track small and mid-sized businesses to Office 365.

Terms of the deal sees Australia and New Zealand customers with 50 to 149 seats of Office 365 enterprise and small business plans now able to utilise the Microsoft FastTrack service, which was previously available only to customers with 150 seats or more.

With strong adoption rates in Australia, and New Zealand standing firm as the biggest adoption of Office 365 in the world, Romans says Office 365 remains top of mind for customers on both sides of the Tasman, acting as a key business driver for moving to the cloud.

“When we sit down with partners and customers, Office 365 is always a key topic of conversation,” he adds. “With Microsoft’s ongoing incentives to push cloud adoption, there is a huge opportunity for partners to get on board and become profitable.

"There’s a growing number of Enterprise Agreement licensing contracts being signed around the world, not just in Australia and New Zealand, allowing businesses access to Azure and Office 365.

"But they haven’t all utilised this yet and this is where the partner can play a crucial role.

“What’s been happening is that traditional licence revenue has been pretty good business, but now it is all moving into the cloud and partners are starting to lose that traditional stream of revenue.

“And the question keeps on cropping up - how can we remain relevant to our customers?”

For Romans, the benefits for partners centres around receiving increased margin on selling additional solutions - “that always sticks out,” he adds.

But in addition, Romans believes resellers can build a consulting practice around ensuring they can assist customers in preparing, migrating and then continuing to operate within the cloud.

“We believe there’s lots of different ways partners can become relevant, make margin and help customers move to both Azure and Office 365 solutions,” he adds.

Romans says the positive is that partners don’t have to sell software or hardware, as Barracuda offers "completely cloud-based software-as-a-service solutions".

Looking ahead to the local market in 2016, Romans says Barracuda is embarking on a reseller recruitment drive in Australia and New Zealand, built around the company’s strong Microsoft offerings.

“On the Microsoft front, we’re looking for partners that are strong implementors of Azure,” he adds. “Take high-end consulting practices and Systems Integrators, they are key partners in helping customers adopt Azure.

“We’re also opening up lines of communication with licensing partners, who have a strong Microsoft licensing pedigree and help provide the necessary set of tools within the cloud to write more licensing and make more margin to provide the corrected amount of functionality when moving to the cloud.”

Romans is under no illusion that Microsoft solutions represent a big business driver for Barracuda in the local market, but with the market humming again following a summer break, key plays also exist within the backup and disaster recovery space.