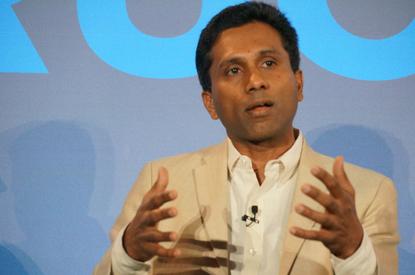 When Microsoft's data chief thinks about the future, he sees a world where developers create applications that leverage machine learning and predictive analytics without needing the help of a data scientist.

Joseph Sirosh, the corporate vice president in charge of Microsoft's Data group, likens the current state of machine learning tools to an age decades ago when people bought tailored shirts. In a similar way that mass manufacturing now lets people grab a shirt off the rack, he says a similar transition is coming to application development.

In an on-stage interview at the Structure conference in San Francisco Wednesday, Sirosh touted a vision of a marketplace for finished tools that developers can plug into apps to provide intelligent capabilities like speech recognition, facial recognition, forecasting and more.

"In the future, there will be a large, enormous selection of finished, intelligent APIs in the cloud," Sirosh said.

Much like Apple's App Store, a marketplace would allow developers to find the best tools for an application and plug them in, without going to the trouble of hiring data scientists and building their own machine learning models.

Such a marketplace could come with pitfalls. The provider of those tools will have to provide some guarantee of availability, stability and security for the APIs, since applications will rely on their continued availability.

There's also the matter of pricing. How can companies know that they're getting a good deal for futuristic capabilities? In theory, that's where a marketplace should help. When there are multiple developers creating the same or similar tools, they'll compete with one another on pricing and features.

Such a marketplace might not be as far off as it seems. Microsoft already offers tools to help make applications more intelligent through its Project Oxford suite, which offers APIs that detect faces, voices and more. And IBM offers several of its Watson artificial intelligence APIs as cloud services for developers to build applications.