US retailer Wal-Mart wants to deliver by drone 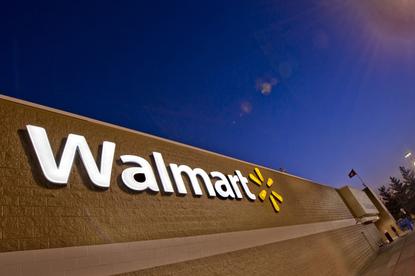 US retailer Wal-Mart has applied for permission to begin testing home delivery by drones -- a move intended to ensure online rivals Amazon and Google don't corner the much-hyped market before it gets off the ground.

In an application submitted Monday to the US Federal Aviation Administration, Wal-Mart asked for permission to begin outdoor trails of drone technology and revealed it has been conducting indoor tests for several months.

The company said it is interested in researching the use of drones both within its supply chain and as a way of delivering goods to customers.

It plans to use two models of drone, both from China's DJI: a DJI Phantom 3 and DJI S900.

Both Amazon and Google are already testing drones as a way to speed the delivery of products from distribution centers to consumers. Amazon's envisaged Prime Air service will seek to deliver packages in less than 30-minutes, but to do so it will require a network of distribution centers near major population hubs.

Wal-Mart already has that.

"We have one of the largest and most efficient supply chains in the world," said Brian Nick, a Wal-Mart spokesman. "There's a Wal-Mart within 5 miles of 70 percent of people in the U.S., so that presents some unique and interesting possibilities for serving customers with drones."

At present, commercial use of drones is prohibited in the U.S., but the FAA has been granting a number of companies waivers that allow them to fly for commercial purposes. More than 2,000 such waivers have been issued to companies, largely for photography, agriculture or surveying operations.

For regular drone delivery to get off the ground, laws will need to be changed. Current restrictions prohibit flying drones beyond the line-of-sight of a human operator or over people.

Amazon and Google are among the companies lobbying for a change in the rules to allow automated operation of drones in a dedicated slice of airspace. Amazon wants a high-speed drone zone between 200 and 400 feet while Google has argued that all airspace under 500 feet be reserved for drones that fly automatically, and that they're integrated with a next-generation air-traffic control system currently being developed by the FAA and NASA.