Researchers at IBM say they've made a major breakthrough in carbon nanotube technology that could speed the development of smaller, faster and more powerful chips. 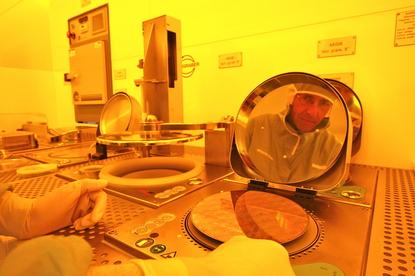 The reflection of Roland Germann, manager of IBM's Nanotechnology Center Operations at IBM Research Zurich, is seen in a silicon wafer. Credit: IBM

Researchers at IBM say they've made a major breakthrough in carbon nanotube technology that could speed the development of smaller, more powerful chips.

The team has figured out a way to connect carbon nanotubes -- tiny, conducting tubes of carbon atoms -- with silicon transistors in such a way that the size of the connection doesn't adversely affect its electrical properties.

Shrinking the size of transistors and their associated circuitry is vital if chip technology is going to follow Moore's Law and keep getting more powerful, but conventional technology is fast approaching its limits.

Earlier this year, an international consortium led by IBM disclosed development of a test chip with transistors as small as 7 nanometers -- roughly 10,000 times thinner than a human hair.

The transistors make excellent high-speed switches -- exactly what are needed for more powerful supercomputers and smartphones -- and carbon nanotubes make excellent tiny conductors for connecting them together, but there's been a problem.

As the size of the contact between the chip and carbon nanotube gets smaller, the resistance increases. Engineers want the contact to be as small as possible, but higher resistance means using power -- the opposite of what's required.

"You really don't want the contact resistance to dominate in the device," said Wilfried Haensch, an IBM research engineer. "If resistance gets higher and higher, it doesn't matter what happens in the device because it's limited by resistance."

That's where IBM's latest breakthrough comes in. The company has figured out a way to interconnect the transistors and carbon nanotubes in a way that the resistance doesn't vary with the size of the connection.

But IBM still has work to do. The new technique provides a uniform resistance of about 30 kiloohms at all sizes of connector and IBM wants to reduce that to around 18 kiloohms.

The research will be published in the Oct. 2 edition of Science.

Last year, IBM said it would spend $3 billion over the next 5 years to push research and development in advanced chip technology at 7 nanometers and beyond. That research includes carbon nanotubes as well as quantum computing, low-power transistors and silicon photonics.