Viewers can watch and navigate the immersive videos on desktops and Android now, iOS later 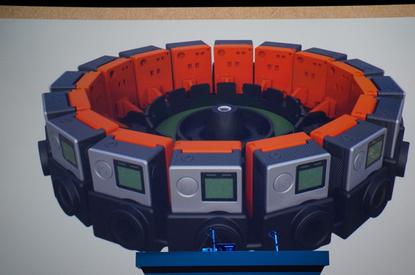 For everyone immersed in Facebook's News Feed instead of work, it's now more immersive than ever thanks to 360-degree videos.

Users and brands can now post clips shot with circular arrays of cameras in order to capture every angle of a scene. Viewers can look all the way around the space, as well as up and down, to take in the whole environment where the video was created.

Facebook users can start to view 360-degree videos on desktop browsers and on Android devices now. The feature will be available on Apple's iOS in the coming months, according to a Facebook post on Wednesday by Chris Cox, the company's chief product officer.

Viewers can navigate an all-around video on a desktop by dragging the image around with a mouse. On a phone, they can drag with a finger or just hold up the device and watch the view follow them as they turn with their feet, creating the illusion of looking out at a panoramic view in real space.

The feature launched with several videos posted to Facebook to show off its potential, including a teaser from Walt Disney for its upcoming Star Wars movie. Other entries included the opening of Saturday Night Live's 40th anniversary special, documentary footage of Afghanistan by the Vice channel, and a motocross video from GoPro, which is rolling out a 360-degree camera rig based on Google's Jump virtual reality platform.

Facebook CEO Mark Zuckerberg has said video is where it's at for social media now and virtual reality is what's coming next. Facebook bet $2 billion on that proposition last year when it bought virtual-reality headset developer Oculus. The Oculus Rift VR headset is scheduled to ship by March of next year, kicking off with a handful of games to play.

Seamless 360-degree video could be one of the applications that drives demand for VR. In addition to GoPro's Odyssey, a US$15,000 device built around 16 GoPro Hero4 Black cameras, there's a rig coming from Nokia that will produce content that can be viewed on the Oculus Rift. Google is making its Jump platform available to anyone and plans to use it for immersive YouTube videos that can be viewed on the Cardboard phone-based VR headset.