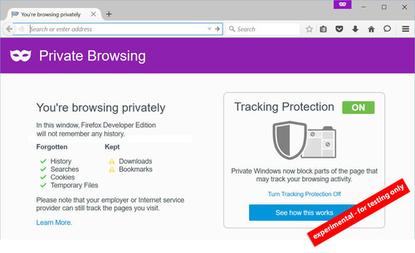 The company is testing enhancements to private browsing in Firefox designed to block website elements that could be used by third parties to track browsing behavior across sites. Most major browsers, Firefox included, have a "Do Not Track" option, though many companies do not honor it.

Mozilla's experimental tool is designed to block outside parties like ad networks or analytics companies from tracking users through cookies and browser fingerprinting.

It's available in the Firefox Developer Edition on Windows, Mac and Linux, and Firefox Aurora on Android, Mozilla said Friday.

The tool is in prebeta, although it might be incorporated into future versions of Firefox's main browser.

The tool might cause some data-hungry websites to not load properly, Mozilla said. Users can unblock specific websites if they wish.

"We've worked with developers and created a process that attempts to verify that add-ons installed in Firefox meet the guidelines and criteria we've developed to ensure they're safer for you," Mozilla said in a blog post.

Web tracking provides fuel to the lucrative business of targeted ads. A recent report showed that the usage of ad-blocking software is on the rise, costing publishers billions of dollars.

Other browser extensions designed to block tracking and targeted ads include Ghostery and AdBlock Plus.

The Electronic Frontier Foundation, meanwhile, is trying to develop a new standard for the "Do Not Track" browser setting to make it more effective.