Fujitsu brainstorm room lets you write on the walls 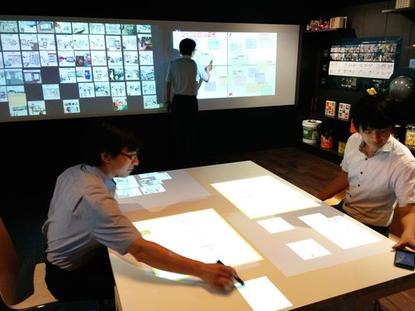 Fujitsu staffers demonstrate a digital brainstorming system in Tokyo on August 6, 2015, sending projected sticky notes from the table to the wall in the background.

If you take the concept of the paperless office seriously, Fujitsu has a meeting room just for you.

The electronics manufacturer is showing off a user interface (UI) designed for brainstorming. It features digital writing surfaces and digital sticky notes that can be linked to information on smartphones as well as projectors for the walls and tables.

Designed to go beyond electronic whiteboards and large tablets for meetings, the system is supposed to allow the seamless sharing of mobile device data over large projection surfaces, as well as the creation and sharing of new data. The company envisions companies, schools, banks and product showrooms using it in the future.

The UI differs from similar attempts to improve on paper-based brainstorming in its degree of complexity. At a workshop space in Tokyo, a table and nearby wall were outfitted with overhead projectors, cameras, a Kinect motion sensing system, infrared light pens, Wi-Fi linking participants' mobile devices and a server running the UI software.

Fujitsu staffers sat down at the table and shook their smartphones to activate an app that would send their phone data to the UI. Their phone screens were projected in large format on the table and various menu options were selected with the pens.

The staffers wrote in Japanese on projected windows on the table, and could select a feature that converted their handwriting into text. The words were automatically transferred to digital sticky notes, which were then "thrown" to the wall by dragging the pen across the table.

At the wall, another staffer arranged the notes on a projected graph. The wall also served as a digital writing space for notes, which could be sent between users and transferred to their phones.

Illustrated prompt cards with idea-stimulating subjects such as "office robots" were also projected on the wall, and could be thrown to the table and back.

Meanwhile, the staffer at the wall was surrounded by colored dots projected onto the floor, showing how his position could be tracked using the cameras, Kinect and inertial sensors in smartphones. The tracking allows for smart device information to be displayed easily on the wall.

The unique feature of this system is that on-site equipment and smart devices can be immediately linked, and the place itself is becomes a user interface where device information can be freely expanded, said Naoyuki Sawasaki, a project director at Fujitsu's Ubiquitous Systems Laboratory.

Fujitsu is also considering improving the system so that remote users can also participate in such brainstorming sessions. That would likely make them even more complex and prone to glitches, but the company hopes to commercialize the UI after a field test from August through next March.