The marketers of Mole Detective apps lacked proof their products could detect melanoma, the agency says 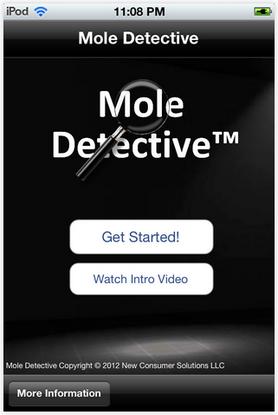 The U.S. Federal Trade Commission has settled a false adversting complaint with the marketer of mobile app Mole Detective.

Smartphone users might be better off seeing a doctor than relying on a family of mobile apps to diagnose whether moles on their skin are cancerous.

The final defendant remaining in a U.S. Federal Trade Commission lawsuit alleging false or unsubstantiated claims for a family of purported melanoma detection mobile apps has settled with the agency.

Under the settlement, Avrom Lasarow is barred from making further deceptive health claims about his products, the FTC said Thursday. He and his company, L Health, advertised the Mole Detective family of apps, which were sold for up to US$4.99 in the Apple and Google app stores, the agency said.

"We haven't found any scientific evidence that Mole Detective can accurately assess melanoma risk," Jessica Rich, director of the FTC's Bureau of Consumer Protection, said in a statement. "If you're concerned that a mole may be cancerous, please see a health professional."

Lasarow and his company took over marketing the Mole Detective app in August 2012, after it was originally developed and marketed by Kristi Kimball and her company, New Consumer Solutions. Lasarow's company added derivative apps like Mole Detect Pro, the FTC said.

Lasarow, Kimball, and their companies were named in a February complaint filed by the FTC.

The Mole Detective apps instructed users to photograph a mole with a smartphone camera and input other information about the mole, the agency said in its complaint. The apps then supposedly determined the mole's melanoma risk to be low, medium, or high.

The marketers deceptively claimed that the apps accurately analyzed melanoma risk and could assess the risk in early stages, the FTC alleged. The marketers lacked adequate evidence to support such claims, the agency charged.

Kimball and her company agreed to settle the charges before the FTC filed its complaint, and on May 29, the U.S. District Court for the Northern District of Illinois, Eastern Division, entered a default judgment against L Health. Lasarow has now agreed to a stipulated order settling the agency's charges.

Under the proposed settlement, Lasarow is prohibited from making any misleading or unsubstantiated claims about the health benefits or efficacy of any product or service, including that a device detects or diagnoses melanoma. The proposed order also imposes a $58,623.42 judgment, which is suspended based on Lasarow's inability to pay.