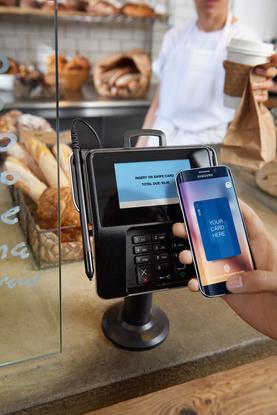 Samsung will launch its mobile payment service next week, a crowded market which includes heavyweights Apple and Google.

Samsung Pay will be available in South Korea on August 20 followed by the US on Sepember 28. The system will eventually be rolled out in the UK, Spain and China, Samsung said, although it didn't offer a time frame for this expansion.

Samsung's original rollout plans, announced in March at Mobile World Congress, called for Samsung Pay to appear first in the U.S. this summer.

Instead, it relies on a technology called Magnetic Secure Transmission (MST) to pass along the information in a card's magnetic strip to terminals already used by retailers. This means a phone using MST can be used to purchase items at nearly any payment terminal.

The expense of installing NFC-compatible terminals has prevented many retailers from adopting the technology, hindering the use of mobile wallets. Samsung CEO J.K. Shin noted these concerns during an event in New York where he also announced the company's newest smartphones. Shin said merchants can accept Samsung Pay without added costs while people can use the system at almost every store that takes credit cards.

Even though Samsung talked up MST, its payment system will also work with NFC.

Samsung acquired MST technology in February after purchasing mobile payment company LoopPay. At that time, LoopPay claimed MST works in approximately 90 percent of the point-of-sale terminals in the U.S. A Samsung spokeswoman added that less than 10 percent of U.S. retailers used NFC.

Samsung Pay will come installed on the company's latest smartphones, the Galaxy Note 5 and Galaxy S6 edge+. Starting in the middle of August, a software upgrade will let Galaxy S6 and S6 edge owners in the US and South Korea install Samsung Pay.

Instead of exchanging credit card details with a terminal, Samsung Pay uses tokenization to pass along a temporary code, a system found in other contactless payment systems. Customers use their fingerprint to confirm a purchase.

Samsung is working with South Korea's major credit card companies on incorporating Samsung Pay into payment networks. In the U.S, Samsung will work with credit card issuers like American Express, Visa and MasterCard as well as large banks, including Chase and Bank of America.

At least one U.S. credit card company has already said it's supporting Samsung Pay: Discover customers will be able to use Samsung Pay at some still undetermined point in 2016.

Tech companies aren't the only ones developing contactless payment systems. Merchants including CVS and Walmart are part of a retail group building its own mobile wallet called CurrentC.