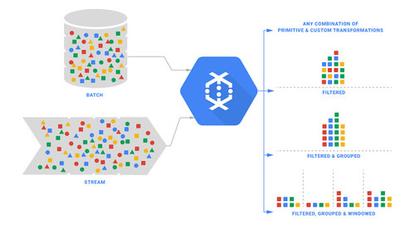 Two Google big data toolsets have finally moved out of beta and into full commercial release, adding to its cloud portfolio a data analysis framework and a service for managing data streams in real-time.

Google Cloud Dataflow, which could serve as a possible replacement for Hadoop, provides a framework for fusing different sources of data within one processing pipeline. Google Cloud Pub/Sub is the company's service for managing data streams in real time.

Both services were announced at the Google I/O 2014 conference, and have been available as public beta trials for some time.

As full-fledged commercial offerings, these services are now fully integrated into the Google Cloud Platform, Google's collection of tools for orchestrating cloud-based operations.

Dataflow can also serve as a speedier alternative for crunching large amounts of unstructured data, compared to the batch-processing-oriented Hadoop, Google claimed.

Google Cloud Pub/Sub can serve as a messaging system, providing a way for data analysis systems to work from a stream of fresh data as it is generated. It can handle up to a million messages a second, which it can push to other Google analysis services such as Dataflow.

The beta version of the service has already delivered over a trillion messages to users.

Pub/Sub starts at $0.40 for the first 250 million messages, with the cost going down for greater usage. Cloud Dataflow pricing is based on a per job basis, depending on the time it takes to complete an operation and the amount of data that must be moved around.