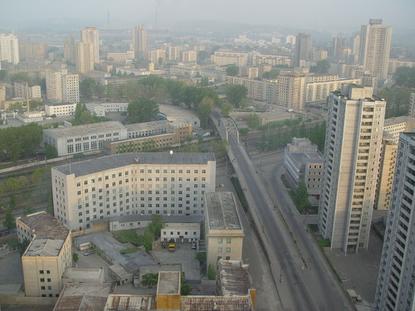 Pyongyang, the capital of North Korea, in a file photo from 2002. More than 3 million of the country's 24 million people live here.

Windows may soon support the new time zone announced by the North Korean government on Friday.

In a post to Microsoft's Daylight Saving Time & Time Zone Blog, a company staffer said that it is "currently investigating" the creation of a new time zone in Windows to work with the change. Microsoft expects that a patch for the time zone change will be available either later in August or at the beginning of September. The state-operated Korean Central News Agency announced the change on Friday and said that the country would be migrating to the new time zone on August 15.

The news agency said that the new time zone, which is 8-and-a-half hours ahead of Coordinated Universal Time (UTC), will return North Korea's time zone to where it was before the Korean peninsula was colonized by Japan. Changing its time zone will put North Korea half an hour behind South Korea.

While the country has a home-grown version of the Linux operating system, Windows is more widely used on computers at schools, universities, libraries and in companies.

Microsoft isn't a stranger to updating its operating system to match different countries' decisions about how they want to manage their clocks. After all, the company has a blog dedicated to discussing its handling of different time zone choices. What makes this choice interesting is that Windows 10 isn't specifically localized for North Korea's dialect of Korean (which is different from that used in the South, similar to the difference between American and British English) and the operating system's region menu lists Korea as one region.

The company hasn't offered any further explanation about its decision to support the time zone. A representative for Microsoft didn't respond to a request for comment on this post. Apple and Google haven't made similar announcements, but the North Korean government's announcement is only hours old.