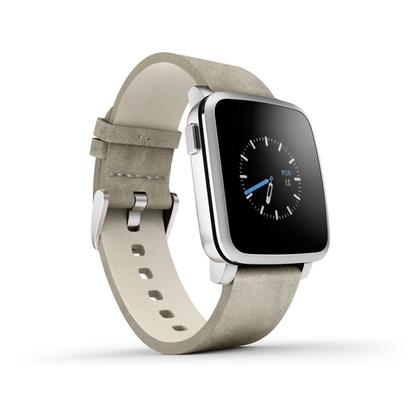 Pebble is now letting anyone pre-order the Time Steel. However, people who order the smart watch now won't receive it until the middle or end of September.

Pebble isn't wasting time getting its smartwatches on the wrists of consumers.

A few weeks after putting the Pebble Time on sale to the public, the company is taking pre-orders on its website for the premium version, Time Steel. Previously, the Time Steel was only available to people who contributed to its crowd-funding campaign, but now anyone can purchase it, Pebble said in a blog post. Pebble expects to ship it in six to eight weeks to those who pre-order now.

Crowd-funding supporters had to wait longer than anticipated to get the Time Steel after Pebble pushed back the watch's delivery date from the last week of July to the first week of August, but the company said it's shipping now.

The Time and Time Steel have a similar design and share features like a color display and the ability to run for several days on one charge. The difference between the two is the finishes, which are more luxurious on the Time Steel. That watch has a metal body that comes in a gold, black or silver finish compared to the Time's plastic casing. The Time Steel also ships with a leather band while the Time's band is made of silicone.

The Time Steel sells for slightly more than the Time, $249 versus $199. The premium version is still considerably less than an entry level Apple Watch, which starts at $349.

Later this year, Pebble will start selling a matching metal band for the Time Steel for $49.99. It has encountered some supply issues with the accessory. People who backed the Time Steel's crowd-funding campaign are meant to receive the leather and metal bands with their watch. However, last month Pebble said the metal band wouldn't be included with all Time Steel shipments and would ship separately instead. Pebble plans on having the band to backers by the end of September.