Drones get bad cell service, but an old ambulance will help 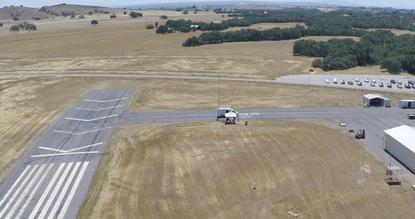 A view of Carnegie Mellon University's Crossmobile seen from a drone during a field test.

In the race to get drones into the sky and zipping across cities delivering packages and snapping photos, cellular networks are quickly emerging as the preferred way of keeping them in touch with the ground.

But researchers are finding that getting a reliable signal a hundred meters up in the air isn't as easy as it might seem, and that could present a challenge for companies like Amazon, which want to fly drones over distances greater than WiFi or similar technology allows and maintain contact with the craft during their flight.

The problem is that cellular networks are designed to provide coverage at ground level -- where the customers are -- and not up in the air. Take a look at any cellular base station antenna and you'll notice its antennas points down, not horizontally or up.

Trying to predict the coverage of a base station is complicated, but that's where researchers at Carnegie Mellon University's Silicon Valley campus come in.

Using a converted ambulance and drones of their own, they have been investigating how cellular signals travel through the air and reflect off the ground and other objects to try to build an accurate model of coverage.

(See inside the ambulance in this video.)

"We've built into this old ambulance, a full cellular network," said Bob Iannucci, leader of the CyLab Mobility Research Center at the campus located at NASA's Ames Research Park at Moffett Field, California. "We have the ability to go anywhere, set up a big antenna, create what we call a cellular bubble of coverage, and connect that via satellite."

The group first started taking measurements the old way, by walking around, but then decided that a phone strapped to the bottom of a quadcopter would be easier.

"We discovered that the signal up there is pretty different from what you might imagine," said Iannucci, who was previously chief technology officer of Nokia and head of the company's research center.

So now, several times a year, Iannucci and his students travel to a remote location armed with an FCC license allowing them to operate an experimental radio system. They raise a pneumatic mast and antenna that have been fitted to the ambulance and power up the equipment. A rack of servers and radio gear inside the ambulance generates the cellular signal and a satellite antenna on the roof of the vehicle provides an Internet connection.

Students then climb up onto the roof of the ambulance and fly their drones, all the time capturing information about the cellular signal.

Recently, the group partnered with the U.S. Geological Survey to get detailed laser scans of the surrounding terrain. The hope is that the radio measurements and terrain map will lead to software than can more accurately simulate cell coverage in any given location.

"People think that 'if I can see the antenna, the signal must be great,' but that's not really true," said Iannucci.

The team didn't set out to map cellular coverage for drones, but the work could be important as regulatory hurdles are cleared for greater use of drones by the public and companies.