The device, with a 5.7-in. display, will reportedly be announced in September or October alongside the Lumia 950, with a 5.2-in. display. 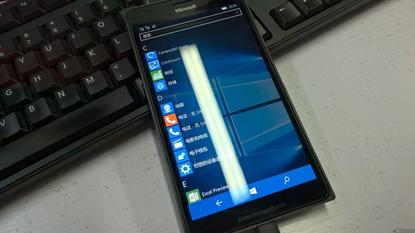 Recent leaked images of a Lumia 950 XL smartphone prototype point to it as Microsoft's next flagship running Windows 10 Mobile.

The device, with a 5.7-in. display, will reportedly be announced in September or October alongside the Lumia 950, with a 5.2-in. display.

Both could ship in November and are expected to be high-end phones, although pricing is one of the few details about the devices that hasn't been leaked.

Many of the specifications have been widely reported and confirmed by analysts who have knowledge of the devices.

Recently, Chinese Web site WPXAP.com posted images of the XL prototype, including a home screen on the display showing an icon to touch to connect to the Windows 10 Continuum feature. That innovative feature would allow for the XL to connect to a keyboard to help mimic the functions of a desktop. The Verge confirmed various phone features from the photos.

Microsoft's Continuum and the universal platform concept -- where apps run across different devices -- will be key to helping the Windows 10 operating system catch on with smartphones.

So far, Windows Phone hasn't gathered much market traction, although there are many analysts and developers eager to see a third alternative OS to iOS and Android on smartphones. Juniper Research said Microsoft shipped only 8.4 million smartphones in the second quarter of 2015, accounting for less than 3% of the market.

In addition to the Continuum icon shown in the leaked photos, the XL will support Microsoft's Surface Pen capability, for taking notes on the display, and sport a USB Type-C connection. Both the 950 and 950 XL will have 20-megapixel rear cameras, putting them at the top end of the market, according to online sources and analysts.

Innovations aside, analysts are concerned with how much the devices will sell for and even then don't see a big uptick for Windows Phone sales.

Noting that Microsoft has already adopted a strategy of a high-end Surface Pro tablet, analyst Jack Gold of J. Gold Associates called the XL "essentially the Surface Pro of the Windows Phone market."

He added, "I don't expect Microsoft to continue to build and sell low-end phones where there are no profit margins." Getting out of the low end "was what Microsoft's recent restructuring was all about."

In late June Microsoft CEO Satya Nadella signaled some "tough choices" were coming. By the end of July, the company had racked up $10 billion for a write-off of its Nokia phone business purchase, severance for 18,000 workers -- mostly in its phone division -- and restructuring costs.

While its phone business seemed dead to some onlookers, the proof it has life are these few leaked photos of the 950XL and specs of that device as well as the 950. Also, Microsoft has a Windows Mobile Insider Preview| for download with a long list of 30 Lumia phones that will run the preview of Windows 10 for Mobile, as well as the HTC One (M8).

Windows 10 for existing low-end and high-end Lumia devices seems assured. The question is what happens in the following year and thereafter.

"Flagship devices is what they will create and distribute," Gold said. "But it's unlikely this 950 XL will do much for their market share."

In addition to price, analysts are still wondering whether later Lumia phones will run on Intel chips. Some analysts have confirmed the 950 will run on a 64-bit Qualcomm Snapdragon 808 processor, with the 950XL running a slightly more powerful 64-bit Snapdragon 810 processor.

Microsoft isn't commenting officially on the Lumia 950 or 950XL.

While Gold and some others are convinced Microsoft will focus just on the high end with new mobile phones, Patrick Moorhead, an analyst at Moor Insights & Strategy said, "no one really knows."