Users will be able to make in-app purchases in games 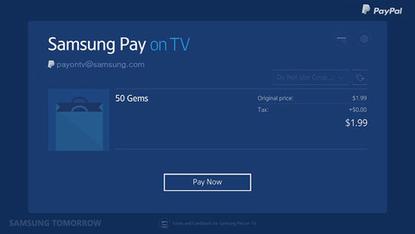 Samsung Pay on TV lets users make payments on some of the company's smart TVs.

Samsung Electronics is stepping up its payments push with the launch of a payment service that lets users buy content on some of its newer smart TVs.

The service is designed from scratch to provide an easy and safe way to make payments on TVs using credit cards, debit cards or Paypal, according to Samsung.

Once users have registered, they just have to press the "Pay Now" button, and enter their PIN. They'll be able to make in-app purchases in games, for example. The service will initially be offered in 32 countries on select TVs that went on sale either this year or in 2104, Samsung said without offering any further details.

At first it won't be possible for users to buy content on their TVs using their smartphone. But Samsung adding that functionality in the future makes sense because it would make the mobile version of the company's mobile payment system, called Samsung Pay, more attractive. Regarding its future plans for the smart TV payment service, Samsung just said it already has enhancements in the works.

Chip vendors such as Broadcom are working on products that will expand the use of mobile payments beyond physical stores. Earlier this year the company launched the BCM58100 family of microcontrollers with integrated support for NFC. The chipsets are designed for mobile payment terminals, personal computers and other applications, including Internet of Things products, Broadcom said at the time.

The mobile version of Pay is scheduled to launch in the U.S. and South Korea in the near future and Samsung is currently working with banks and partners to bring the payment service to Europe, it said last week.