Incident highlights risks of renting out homes through online sites 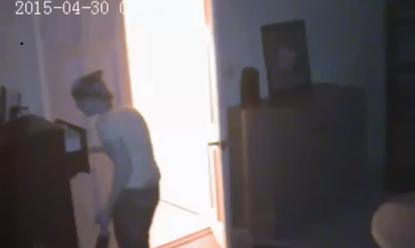 A closed circuit TV image distributed by San Francisco Police shows a woman inside a locked room in an Airbnb rental where $35,000 in valuables were stolen

San Francisco police suspect a woman got much more than a bed for the night when she booked a stay in the city through Airbnb earlier this year.

Police say Jana Dominquez, a 27-year old from the nearby city of Richmond, is suspected of stealing over $35,000 in valuables from a house she rented though the site.

Dominquez had full access to the house on 27th Avenue in the city's Outer Sunset district in April this year when the theft is thought to have taken place.

The victim, who rents the house though the site, kept valuables in a locked closet and office. Closed circuit TV images from the residence time-stamped April 30 clearly show Dominquez entering the locked upstairs apartment and a commercial establishment directly below it.

The theft wasn't discovered until later and was reported to police on June 8.

The incident comes as services like Airbnb are waging a charm offensive intended to soften their image ahead of an upcoming ballot initiative in San Francisco that would curtail the number of nights each year that a person could rent a space through such websites.

At a time when surging housing prices are pushing many people out of the city, there is frustration on one side that entire homes are being used for short-term rentals, taking them off the conventional rental or sale market. On the other side, residents who are struggling to stay in the city say renting out a spare room though such sites brings in much needed income.

The San Francisco Police Department is asking anyone who knows the whereabouts of Dominquez to contact Sergeant Jesse Farrell at Taraval Station on 415-759-3100 or use the SFPD Anonymous Tip Line on 415-575-4444 or text TIP411 with "SFPD" at the beginning of the message.