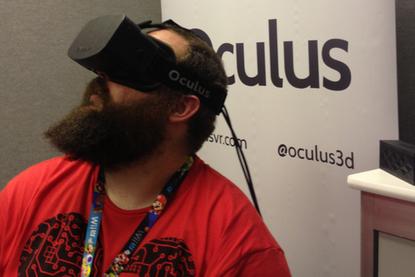 When people grow tired of posting photos and videos on social media, what then? Virtual-reality posts, according to Mark Zuckerberg.

We're entering into an era in which people's posts increasingly will revolve around video, "but that's not the end of the line," according to Facebook's CEO. After video, he said, "I think immersive 3D content is the obvious next thing."

The Facebook chief made his comments in response to a question during the company's earnings call on Wednesday about what mainstream applications could come out of virtual reality and Oculus VR. Facebook bought the VR headset maker last year for US$2 billion, baffling some industry watchers about the social network's intentions.

When the acquisition was announced, Zuckerberg said VR technology is a "strong candidate" to emerge as the next social and communications platform, but he stopped short of anointing it as the medium of the future.

Since then, Zuckerberg has made other remarks about how virtual reality could be used not just for gaming or for entertainment, but for allowing people to connect. Earlier this month, during an online Q&A, Zuckerberg said VR would become the next "normal form" of content after texts, photos and videos.

Judging from his comments on Wednesday, Zuckerberg's thoughts about the uses of VR have evolved.

And Facebook is working to make video content in the News Feed more immersive. At the company's F8 conference earlier this year, the company said the News Feed would soon support spherical, 360-degree videos.

Facebook's Oculus Rift is scheduled to become commercially available to consumers in the first quarter of next year.