The US Navy is 3D-printing custom drones on its ships

Designs for custom missions can be emailed to ships 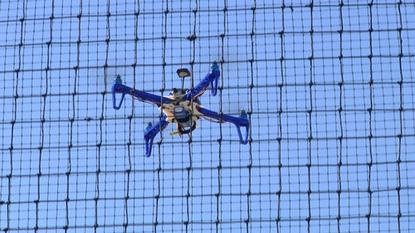 A prototype drone that was 3D printed aboard the USS Essex is shown in Moffett Field, California, on July 28, 2015.

The U.S. Navy has been testing the use of 3D printers on its ships to produce custom drones outfitted for specialized missions.

The project, being carried out by researchers at the Naval Postgraduate School, is investigating whether modern communications and fabrication technology can be combined to give sailors a new tool for whatever mission they are deployed on.

Holding a quadcopter drone in his hands, Alan Jaeger, a faculty research associate at the school, said it was designed by engineers on shore based on requirements of the sailors at sea. The drone was printed on board the USS Essex last December, he said.

The 3D design file was emailed to the ship over a satellite link, and sailors loaded it into the printer. They printed the parts and then followed instructions for assembly, marrying the plastic parts with electronics that were already on board. Those parts included the motors, radio, controller and a GPS unit.

(See the drone fly in this video.)

Jaeger said the idea is that ships could set sail with kits of the core electronics parts, since they are common to most drones, but have the bodies designed according to specific requirements for each mission.

"The challenge aboard a ship is logistics," he said. "Once a ship leaves, getting additional parts to that ship becomes difficult."

In the case of the USS Essex drone, it was designed to carry a small camera and transmitter that would send live video back to a head-mounted display being worn by a sailor. The drone's mission was to fly over ships in support of anti-piracy work.

The ship already had a 3D printer onboard, installed to support its medical role and be used for printing surgical tools.

The flight tests on the Essex revealed some of the potential problems, most of which were associated with operating the drone rather than the printing itself, Jaeger said.

"Even with a small amount of wind, something this small will get buffeted around," he said. They also had to figure out the logistics of launching a drone from a ship, getting it back, how it integrated with other flight operations, and interference from other radio sources like radar.

In a brief flight demonstration during an event at NASA's Ames Research Center, Jaeger took the drone up to prove it flew. Other maneuvers were restricted because of the facility's proximity to the Moffett Field runway.