3D XPoint might change computing as much as SSDs did 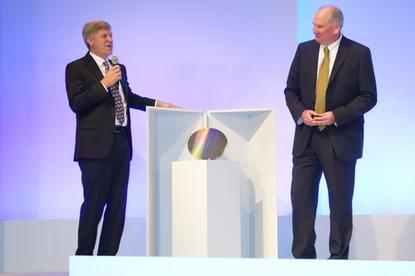 The 3D XPoint memory technology that Intel and Micron announced Tuesday is new to its core and took years to develop, but that work may pay dividends in both living rooms and data centers.

3D XPoint is 1,000 times faster than the NAND flash used in today's consumer electronics and SSDs (solid state drives). That's for both reading and writing data, the companies say, and it's as big a leap as the move from spinning disks to SSDs. It could kick off the same kind of upheaval that the shift to solid-state drives has caused, according to Rob Crooke, senior vice president and general manager of Intel's Non-Volatile Memory Solutions Group. Products are expected starting next year.

Here are a few examples of what 3D XPoint might bring about: Better speech recognition for talking to your phone, better face recognition for biometric security, computers controlled by hand gestures, and seamless transitions between scenes in video games. That's in addition to big-data pursuits like real-time gene sequencing and financial fraud detection.

Intel and Micron call it a new way of holding data that will complement flash and conventional memory, opening the door to new applications that are impossible to predict today.

"This is something that many people thought was impossible and many people gave up trying to accomplish," Crooke told reporters and analysts at a launch event in San Francisco. Hundreds of engineers worked on the project, which began in earnest in 2012 as part of a collaboration between Intel and Micron that's been going on for 10 years. The companies wouldn't say how much they've invested.

The "3D checkerboard" architecture they developed forms a grid where each memory cell is attached to two metal lines, one vertical and one horizontal. This allows the system to address each cell by itself instead of doing block erasing and re-writing as NAND does. That increases speed.

The system also stores the bits on each cell differently from NAND, by changing the resistance of the material itself instead of moving electrons. As a result, it can use all the material in the cell, which leads to greater density and will help 3D XPoint to scale up, Crooke said.

Fundamental breakthroughs that bridge the gap between storage and memory have been talked about for years, including "memrister" technology that Hewlett-Packard had said it would use in its Machine, a computer that stores all its data in non-volatile memory, said Technalysis analyst Bob O'Donnell. HP recently backed away from memrister and said the Machine would use conventional DRAM for now.

3D XPoint isn't exactly unified memory because it's meant to complement NAND and DRAM, but Intel and Micron earn points by actually making their technology a reality, O'Donnell said.

"It's hard to overstate the kind of impact that this could have," said Pund-IT analyst Charles King. Just as the falling cost of DRAM has made in-memory databases like SAP's Hana feasible, 3D XPoint could bring very high-speed data access to a broader market, including consumer systems -- probably beginning with high-end gaming PCs, he said.

The new memory, in turn, may help to drive system builders toward faster pipes between storage and CPU. Intel has been pushing NVME (Non-Volatile Memory Express) to take full advantage of the speed of flash, and 3D XPoint raises the stakes again. "It's incredibly important for a technology like this," Crooke said.