Most users faced with one simply abandon the mobile site they were trying to visit, Google found 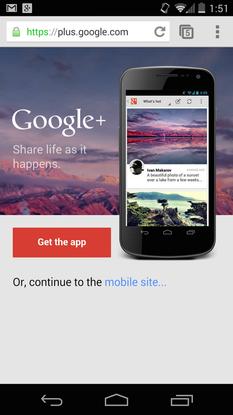 An example of the widely despised interstitial ad.

Most mobile web users are all too familiar with the infamous "interstitial" ad that often pops up to promote a website's native app, but this week Google did them a favor and eliminated its own such ads.

After internal user studies suggested that mobile Google+ users didn't enjoy the pesky full-page ads inviting them to download the Google+ app, Google did a more formal study. It found that while 9 percent of the visits to its interstitial page resulted in someone pressing the "Get App" button, a full 69 percent resulted in the user abandoning the page altogether, without visiting the app store or even continuing on to the Google+ site.

As a follow-up to that study, Google last year experimented with removing the interstitial ad and using a less-intrusive banner ad for the app instead. The result: Active users on its mobile website increased by 17 percent, while native Google+ app installs remained largely unaffected.

Google's conclusion: "We decided to permanently retire the interstitial," wrote David Morell, a software engineer for Google+, in a Thursday blog post. "We believe that the increase in users on our product makes this a net positive change."

Google hopes other mobile sites will reconsider the use of promotional interstitials as well, Morell added.

"I'm not surprised at all," said Greg Sterling, vice president for strategy and insights with the Local Search Association.

Interstitial screen "takeovers" are very annoying to smartphone users and "don't really perform for developers and publishers," Sterling added. "It's in everyone's interest to find alternatives."