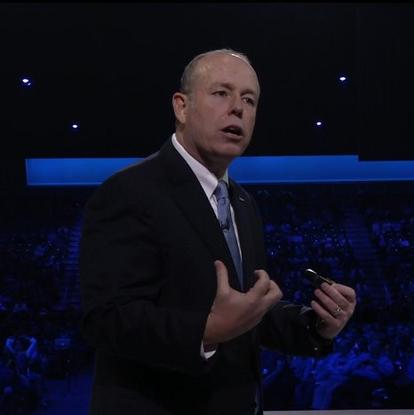 Following what has become a tradition for Microsoft's Worldwide Partners Conference, chief operating officer, Kevin Turner, did some old-fashioned fiery preaching in his closing keynote, this year condemning cloud-service competitors like Google for not respecting customers' privacy as they chase profits.

"Our business model is to sell cloud services and devices to consumers and the enterprise. We don't sell your data, don't snoop your data. We don't read your email. We're not listening to conversations in your house, driving cars up and down the street to do so. This is a company that has taken the high road in this area," Turner said.

Turner's aim - to get Microsoft partners enthused about the company's offerings and package them into the customised systems they build on behalf of enterprise clients - centered on Cloud offerings in particular this year. About 15,000 people attended WPC in Orlando, Florida, this year.

"The Cloud is really where the growth is," Turner said. Half the licensing agreements that Microsoft signed with enterprise customers in its last fiscal quarter had cloud components, up by 50 per cent from the same time a year ago, he said.

Office 365 is adding a million new users per month, and the Office apps for Android and iOS have been downloaded over 100 million times.

For Azure, the company has doubled new customers over the last quarter, Turner said, while Azure compute services use doubled as well. Five million businesses are now using Azure Active Directory services. That adds up to a solid user base upon which partners can easily build, and an area where they can pass on savings to customers, Turner argued.

"If you want to save customers real money, look at their Oracle, VMware or their SAP spend. Go look at Cisco, Red Hat, Tableau, IBM. Help them save money in this modern world," Turner said.

Turner said that Microsoft has lured over 1252 enterprises back to Office 365, after they defected to Google Apps. "We've got to go rescue the rest of the Google Apps customers. Throw them a life preserver," Turner urged the audience. "We have to go win every single deal against Google."

He urged partners to foster the same competitive spirit when competing with Amazon Web Services, another big competitor to Microsoft's Azure services.

Turner also dispelled rumors about Microsoft exiting the business of manufacturing mobile devices. Last week, the company announced plans to lay off 7,800 employees, many of them from the Nokia acquisition of 2013.

"Make no mistake. We're not giving up on Phone. We're resetting for profitable growth, and we will continue to innovate in that space. It remains an important part of our portfolio," Turner said.

Instead, Microsoft is restructuring its smart phone business, Turner explained. The company will focus on developing a handful of innovative devices to "showcase our uniqueness in solutions," he said, noting that the company is changing its manufacturing, distribution and marketing processes around phone manufacturing.

One bright spot in the mobile space for Microsoft is the company's Enterprise Mobility Suite set of cloud services.

EMS is "the single hottest product in the history of Microsoft," Turner claimed. EMS provides security and support services for iOS, Android and Microsoft devices, with the aim of reducing the complexity in supporting multiple platforms.

EMS will be a "billion dollar product," Turner predicted, noting that EMS subscriptions had increased by 700 per cent, though he did not specify the time period in which this rapid growth occurred.