Google, ISPs offering free broadband to low-income families in the US

The U.S. government's ConnectHome program will target families with children and get 275,000 households online 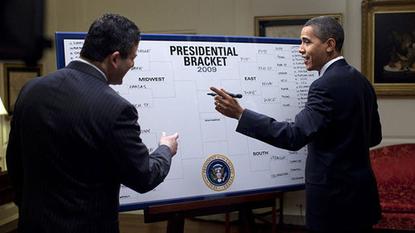 This guy takes his picks seriously every year.

Google and seven other ISPs have joined a new U.S. government pilot program to connect 275,000 low-income households to the Internet for free or at reduced rates.

U.S. President Barack Obama will discuss the initiative, called ConnectHome, Wednesday in Durant, Oklahoma. Durant serves as the capital of the Choctaw Tribal Nation, one of the communities taking part in the program.

In Durant, like in many parts of rural Oklahoma, the library is a town's only location with a high-speed Web connection, the state's director of libraries said in a statement.

ConnectHome will prioritize households with children and connect approximately 200,000 students to the Internet.

Google will offer its Fiber broadband service for free to certain public housing residents in Atlanta and Nashville, Tennessee. In Seattle, some people living in federally subsidized housing can connect to the Web with CenturyLink's service for US$9.95 per month for a year and for $14.95 per month for the next four years. Other ISPs, including Sprint and Cox Communications, will offer plans for free or for monthly rates of $9.95.

Some of the other cities where ConnectHome will roll out include Los Angeles, New Orleans and Baltimore.

Additional tech businesses involved with the program include code repository GitHub, which is funding technical training, and online learning site Khan Academy, which will offer free college board practice resources.

ConnectHome was announced the same day as the White House Council of Economic Advisers issued a report saying lower-income U.S. residents use the Internet less and have slower Web connections. Sixty-six percent of some of the poorest families have a computer, but lack an Internet connection, the report said.

Without Web access to complete homework, an achievement gap can form between low-income and middle-class students, the report said.

The role the U.S. government should play in providing its citizens with fast, reliable Internet access has become a popular topic in the country's political discussions.

Some politicians have called broadband access a necessity, partly because many companies only post jobs on websites and some government services can only be applied for online.

Critics, meanwhile, argue that people can live without Web access and being able to get online isn't a right.