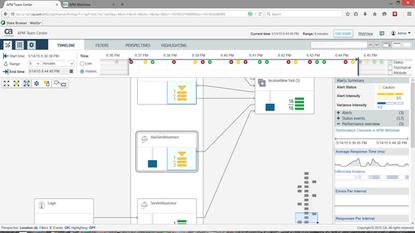 CA APM 10 now features a timeline for tracking a problem as it unfolds.

Like the farmer and the cowman, the administrator and developer can work together, even if they labor in separate departments.

CA Technologies has updated two of its performance monitoring tools so developers and administrators can get a fuller view of system performance, showing in a single view how well both an application and its underlying infrastructure are operating.

The new versions of CA APM (Application Performance Management) and CA UIM (Unified Infrastructure Management) can now be used together to quickly troubleshoot and repair misbehaving applications, according to CA.

With the release of the new versions of these products, developers and administrators can now see both sets of metrics within a single screen.

Prior to these releases, such information tended to be monitored by different parties within an organization, with administrators watching the infrastructure and the developers overseeing the performance of their programs.

Combining these duties into a single workflow is an increasingly popular practice called devops, which can shorten the time it takes to update and repair applications, according to devops adherents.

CA designed CA APM to collect metrics on how well enterprise-built applications are performing, by building agents into the application in the development phase.

CA APM 10 comes with a redesigned user interface, which allows the dashboard to include infrastructure metrics piped in from CA UIM.

In addition, the updated software allows users to filter results based on an expanded set of attributes, such as the location of where the apps are running, or filter results by a specific business service or user.

The updated software also provides a new set of visual charts that can show how the application has been changed over time, or what impact that a specific service has had on application performance.

One potential user of CA APM is credit card processor Elavon, which uses the software to help ensure the reliability of its services. The company plans to use to CA APM 10 to foster greater collaboration among its development teams, thanks to how the software can highlight performance data by tasks or roles.

The CA UIM software is routinely used for keeping track of common infrastructure components, such as servers and network routers, to ensure they are running and are meeting the performance metrics.

CA UIM 8.3 can now keep an eye on how many popular big data styled applications perform. It can watch the Apache Cassandra and the MongoDB NoSQL databases as well as the Hadoop data processing platform. The status of all these applications can be viewed from a single console.

The updated CA UIM has also been integrated with another tool, called CA Network Flow Analysis, that can provide insight into how much bandwidth an application is using, which can be helpful in predicting performance issues before they occur.

CA is one of a number of companies offering APM tools, alongside AppDynamics, BMC Software and Dynatrace.

CA did not reveal pricing of the newly updated products.