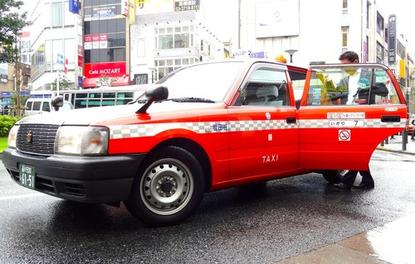 A passenger gets in a taxi July 2, 2015, in Tokyo. Ride-hailing apps are slowing changing how residents of the capital use taxis and other car hire services.

Get in a taxi in Tokyo, and you'll get a ride with a little old-world charm.

The liveried cabs are shiny, spotless and odor-free. The seats are covered in white lace. The drivers wear suits, sometimes sporting white gloves and even bow ties.

They concentrate on driving instead of chatting on mobile phones. While some newbie drivers don't know Tokyo like the back of their hand, GPS ensures they won't get lost, and they'll get you to your destination as quickly as possible. And while they can be expensive compared to taxis in major U.S. cities, they don't take tips.

But despite there being about 50,000 cabs on the roads of the capital, more than three times the number in New York's Manhattan, a cab can sometimes be very difficult to get, especially at times of peak demand. That creates an opportunity for ride-hailing apps in Tokyo and other Japanese cities.

Yet as Uber tries to extend its dominance to another new market, it's finding the local competition hard to beat.

One reason Uber flourished so quickly in the U.S. is that, at least in some cities, taxi services were abysmal. Many fleets still have cars that are shabby and run down, and drivers are as likely to be talking on a cell phone as paying attention to passengers. Combined with the convenience of hailing a cab instantly with an app, Uber was a breath of fresh air.

Japan is a different story, and in some ways reflects the challenges Uber faces as it tries to expand in other new countries. Along with well documented regulatory problems, it's competing against local services that are often highly regarded, if not quite as efficient.

"Taxi drivers in London are famous for passing tests, but I can say that Japanese taxi drivers take real pride in their work," said a former taxi driver in Tokyo who now sits behind the wheel of an Uber sedan. "On the level of service, Japanese taxis are one of the best in the world."

Longtime cab users in Japan would seem to agree. Kamal Vijayvargiya, a businessman who has been dividing his time between Japan and India since the 1980s, said he trusts taxis here implicitly and has never been taken for a ride, so to speak, or refused when requesting a destination.

"If you lose something in a taxi in Japan, there's a 99 percent chance it will come back -- even if you're drunk," Vijayvargiya said.

As in other countries, like India and China, Uber is working to adapt its service to compete in the local market. It began full-scale operations in Tokyo last year, and its luxury Uber Black service features drivers with white gloves and Toyota Crown Royal hybrids and other luxury cars. It's partnered here with local car hire companies, in a departure from its model back home.

But so far it hasn't managed to expand beyond the capital, where it currently has only around 50 cars, according to several Uber drivers. ItsEveryone's Uber pilot project in the southern city of Fukuoka, aimed at gathering data on transport patterns, was shut down by Japanese authorities earlier this year because it allegedly broke local laws.

Uber's Tokyo fleet is small for one of the largest cities in the world, and the app often indicates that no cars are available, even around hubs like Tokyo Station. Uber did not respond to a request for more information about its operations in Japan.

Uber has one advantage, in that its cars can be especially in demand at night, when regular taxis impose a 20 percent night surcharge. For about the same price, users can travel in an Uber luxury sedan. And unlike Uber, Japanese taxis can also charge booking fees when summoned to a location as well as fees for using highways.

Uber isn't the only ride hailing app trying to break into Japan. In January, Japan's dominant messaging app Line launched a ride-hailing service that works with Tokyo cab company Nihon Kotsu and other partners. It's being pitched as a way to get a cab when they're hard to find, and it works with cashless payment using Line's mobile payment function.

Hailing a cab from a chat app that's nearly ubiquitous in Japan is a major advantage, and a Line spokeswoman said the company plans to roll out the cab-calling function in Taiwan, where Line also has the top share for messaging. Users still have to pay the standard taxi fee for calling a cab, however.

Founded in London, taxi app Hailo has grown far slower than Uber -- even in Japan, where it's able to hook up users with about 600 of the roughly 8,000 cabs in Osaka. It's currently running a pilot project in that city but wants to expand to Tokyo based on the fact that its app can work with various taxi companies instead of just one fleet, and it has an international app. Like Uber, it has a rating system.

"Drivers and users can rate each other, so you'll always get a nice driver," said Ryo Umezawa, CEO of Hailo Japan, adding that this can address security concerns that women have felt when using cabs flagged in the traditional way. "Drivers, meanwhile, know right away that their sales are going up."

A number of taxi companies in Japan have launched their own ride-hailing apps. These programs may be extending the taxi market in Japan to new types of riders.

"While businesspeople were some of the main taxi users in the past, apps are increasing the number of individuals who ride in taxis," said a spokesman for Nikko Data Service, which has developed a nationwide e-hailing app that works with about 130 companies and some 23,700 cars.