Which songs stumped Shakira? Shazam will now show you 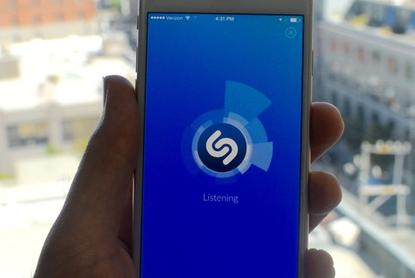 Shazam is releasing a new version of its music recognition app that lets users connect with artists they like and see what songs they've searched for using its service.

Shazam lets people identify songs, TV shows and movies by capturing a brief snippet onto their phone, which gets matched against Shazam's database. The new version due out Tuesday, for iOS and Android, lets users see what songs have been identified by artists using the app. Because not even musicians know every song that's playing.

Users will also be able to follow artists' pages within the app, where they can "like" a musicians' searches, listen to songs they've searched for and get updates on the music they release.

More than 30 artists will have profile places initially, including Alicia Keys, Coldplay, Shakira and Usher, though more will likely come on board later, said Daniel Danker, chief product officer at Shazam.

But Shazam's not the only company connecting listeners with artists. The update comes the same day that Apple is scheduled to launch Apple Music, its paid streaming service. That service includes a component called Connect, which lets artists post updates as they might do on Facebook, and where fans can comment and "like" their posts.

Tidal, the paid streaming service owned by Jay Z, is positioning itself as a hub for fans to connect with artists and gain access to exclusive content.

And last month, Spotify rolled out a redesign that sets the stage for a larger variety of content beyond songs, like videos and podcasts from artists.

Still, Shazam thinks it can keep users engaged by letting them feel more connected to the artists they like. And it can't be too worried about Apple, since on iOS the new version of Shazam will let users play songs through Apple Music.

Songs that an artist has searched for will show up in a user's feed if they follow that artist. Shazam users can already see which songs their friends searched for, by connecting through Facebook.