Microsoft's HoloLens is headed out of this world, with help from NASA 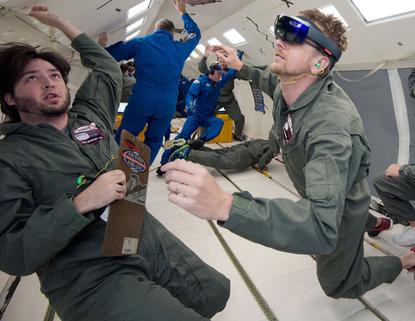 Microsoft is sending its new augmented-reality headgear out of this world ... literally.

NASA announced Thursday that two HoloLens units will be sent to the International Space Station on the next SpaceX-operated resupply mission, due to go up on Sunday. The units will be used for a new "Sidekick" pilot program that's designed to help crews work on the ISS. The program provides augmented-reality overlays to educate astronauts about how to perform certain procedures on the station, which could eventually reduce the need for extensive crew training.

In the future, astronauts could rely on real-time augmented-reality instructions from the HoloLens to help them perform complex functions, which NASA thinks would make them more efficient.

Sidekick can operate in one of two modes a Skype-powered "Remote Expert Mode" or a "Procedure Mode" that provides standalone instructions. When crew members get the devices, they'll test out the hardware and software functionality "in a standalone mode" to confirm that it works. A second set of HoloLenses, which will allow astronauts to test Remote Expert Mode, will be sent up on a later mission.

According to NASA, astronauts are expected to start using the Sidekick software by the end of this year. Sidekick is also slated for testing in late July during a mission NASA astronauts and engineers will undertake to the Aquarius undersea research station.

The announcement of the program comes alongside a video showing Microsoft and NASA engineers (including HoloLens frontman Alex Kipman) testing the device in a weightless environment. Based on the testing shown, it seems like HoloLens would be well suited for use in space, since it allows astronauts to use a computer that's attached to their body rather than having to wrangle a weightless physical device. That said, the device's narrow field of view could be problematic in the close quarters of the ISS.

Sidekick isn't the only application NASA has for the device. The Jet Propulsion Laboratory has also built an app called OnSight that allows users to virtually explore the surface of Mars using imagery displayed by the HoloLens.

Kipman said in a news release that the Sidekick software was a prime example of the sort of applications Microsoft envisions for the HoloLens. The company has also partnered with other organizations, including Case Western Reserve University and Trimble, to develop experiences for the device. It's not all business, either: Microsoft demonstrated a holographic version of the popular game Minecraft at the Electronic Entertainment Expo last week.