The Goodspeed 4G mobile hotspot switches automatically between the SIM cards, so users just have to turn it on 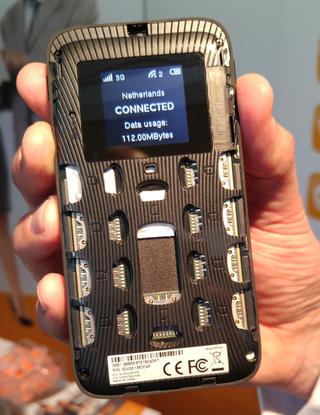 The Goodspeed 4G hotspot that can switch automatically between 10 SIM cards to offer LTE roaming around the world.

Finnish company Uros has launched an LTE version of its wireless hotspot that can be equipped with 10 SIM cards to make roaming abroad easier.

It's slowly becoming more common for operators to let traveling users surf the Web and access email and apps via LTE networks, but the practice is nowhere near ubiquitous. Enter the Goodspeed 4G mobile hotspot, which was launched and demoed this week at the LTE World Summit in Amsterdam.

The device is the world's first commercially available 4G hotspot that can accommodate and switch automatically between 10 SIM cards, making it easier for busy travellers to cross borders, Uros said. Users only need to do two things to use it: switch it on and charge it, according to Tom Lindblad, vice president of global sales and marketing at Uros. Only the SIM cards provided by Uros can be used.

While the Goodspeed hotspot provides access, it's also about keeping costs under control. The company has three price plans. For example, the Pro plan costs €9.90 (US$11) per month and in addition, for actual usage, users pay from €5.90 per day including 1GB of data.

The hotspot has 8 LTE bands, which is enough to provide access in most parts of the world. If there is no LTE coverage, it can fall back on 3G or GSM networks.

The private WLAN connection can be shared with 15 Wi-Fi-enabled devices simultaneously, if that's something users should ever need. The battery allows for 12 hours of continuous use, and lasts seven days in standby mode, according to Uros. The product was developed in collaboration with ZTE, and will go on sale in July. Uros didn't announce what it will cost.