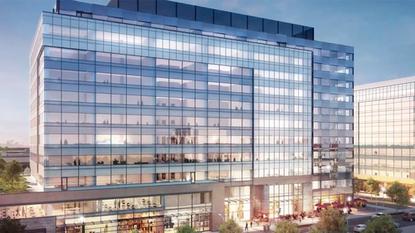 A concept artist's rendering of the Global Innovation Exchange building

China's Tsinghua University has teamed up with the University of Washington and Microsoft to launch the Global Innovation Exchange (GIX) -- a tech-focused graduate school that's the first of its kind.

The program, which was announced Thursday afternoon, will bring people from around the world to a new facility in Bellevue, Washington, near Seattle, to learn and work together. The launch marks the first time a Chinese research institution has opened a physical presence in the U.S., the backers said.

Microsoft has pledged $40 million to provide "foundational support" to the program, with other organizations expected to provide support later.

The institute's inaugural degree program will be a 15-month Master of Science in Technological Innovation, with its first class of 30-35 students starting in the fall of 2016. GIX will be focused on project-based learning that will allow students and faculty to collaborate with companies and nonprofit groups.

The governance structure of GIX will allow other universities to join as equal partners in the institute to help fuel its growth. According to a press release, the organizations expect more than 3,000 students at GIX by 2025.

Microsoft and Tsinghua University already have a friendly relationship. They founded a Joint Research Center for Innovation and Intellectual Property in China in 2013.

It's interesting that Tsinghua chose to locate the GIX near Seattle and not somewhere like Stanford or Berkeley with closer connections to Silicon Valley. It's a sign of the Seattle area's growing prestige as a technology hub, as well as the Emerald City's connection to China. Seattle has also drawn interest from Chinese e-commerce titan Alibaba Group, which operates an engineering office in the city.