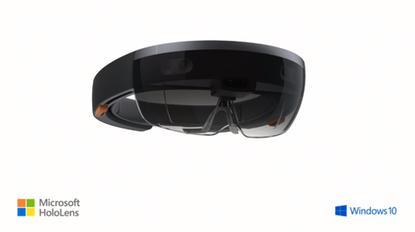 Microsoft used the E3 conference to show off the gaming capabilities of HoloLens, demonstrating how the augmented reality headset can be used to play a version of Minecraft designed for the device.

The HoloLens version of Minecraft will allow a person to play the game on nearly any surface, Microsoft said Monday.

During the demonstration, a person began playing the game on the wall and then transferred the world to a table to create a 3D representation.

Being able to insert holograms over the real world distinguishes augmented reality headsets like HoloLens from the virtual reality experiences offered by devices like the Oculus Rift, which completely immerses a person in a digital environment.

A handheld controller can be used with the special version of Minecraft, but people can also speak commands to HoloLens. For example, a person could tell HoloLens to move the game to a different surface, zoom in or follow another player. Another command allows people to change their perspective of the game and resulted in the world being lifted up to reveal what was underneath. People can also use hand gestures to change viewpoints and manipulate worlds.

Microsoft didn't say how much the HoloLens-version of Minecraft will cost or when it will go on sale. Beyond the ability to play the game in 3D and control it with voice commands and gestures, it wasn't clear if there are gaming features that distinguish the HoloLens version of Minecraft from its standard iterations. Additional details on Minecraft, which Microsoft owns, will be discussed in July during the Minecon conference, Microsoft said.

Microsoft has also been mum on HoloLens' pricing information and a sales date. So far, Microsoft has emphasized that HoloLens will run Windows 10 and that it is a stand-alone device.